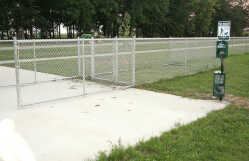 The fencing and gates are now in place, along with strategically placed doggie waste stations, at the new bark park, located just off Capital Drive on the south side of Big Walnut Sports Park on Greencastle's East Side.
Order this photo

Evidently cantankerous old W. C. Fields could never have been a park director.

For among his notable lines and vices, the famously brusque comic is known for proclaiming he could "never work with kids or dogs."

Then he really would probably rather be buried in Philadelphia than living in Greencastle right now ...

Because whether you have active children or four-legged friends, they all have a new park in which to strut their stuff in Greencastle.

While the Bob York Memorial Splash Park officially opened Aug. 4 and has been luring youngsters to the Greencastle Aquatic Center at Robe-Ann Park ever since, a new dog bark park at the south end of Big Walnut Sports Park is ready to make its own splash.

With warm weather still the norm, the splash park continues to be an active place daily. In fact, when he left for the meeting Thursday night, Weinschenk noticed several cars in the nearby lot and counted 20 some people inside the free splash park facility.

"So as long as it stays hot out and people use it, we'll stay open," he said, "we're hoping through the end of September."

Last month Weinschenk told the Park Board that following the Aug. 4 grand-opening event, the activator button malfunctioned and the splash park was left to spray its mist constantly from 10 a.m. to 8 p.m. instead of being activated on demand for 10 or 15 minutes at a time.

He has since reported that the activator has been fixed and "kids can now press the button to make it work."

"All the gremlins have been worked out," the park director assured.

During a final inspection this past week by Department of Natural Resources (DNR) officials (due to the splash park being funded partly by a Land and Water Conservation Grant), the new facility passed with flying colors.

Among the "minor details" addressed was a need to widen the handicap parking spaces, so the blue lines in the parking lot will be repainted, Weinschenk said.

At the dog park, the DNR suggested an additional area of concrete needs to be added to allow greater wheelchair accessibility from the parking lot to the middle of the bark park area.

Weinschenk said since the cost of the parking lot wasn't as much as expected, some grant money remains that could fund the needed concrete pad addition.

Although a grand opening for the dog park is expected sometime later, the facility is open to canine company at present. All the fencing and gates have been installed at the facility, which is divided into big-dog and small-dog areas.

There's even a bad-dog "time-out" area if someone's four-legged friend can't play well with others.

Judging by use of four "pet waste eliminator" stations recently installed with a help of a group of DePauw University volunteers, at least seven dogs have been enjoying the fenced bark park, the park director noted.

"Hopefully this will relieve the stress to our baseball and softball fields (at Big Walnut)," Weinschenk said, alluding to previous unauthorized use of such fenced-in areas by those who wanted to let their dogs run.

Rules for the bark park are still being finalized by a committee, he said, and will be posted at the site along the southernmost edge of the sports park.

Until those are posted, some common rules to remember are:

-- Dogs must be led in on leash and led out on leash.

-- All dogs must have dogtags bearing the name of their owner.

-- All dogs must have had a rabies vaccination and display a rabies tag.

In addition to the rules signage, the dog park will also have benches and picnic tables added in the near future.

-- Heard that materials for the nine-hole expansion of the disc golf course at Big Walnut Sports Park have been received and will be installed in the next few weeks. Weinschenk said he is looking for disc golf players to assist in laying out the new holes.

-- Approved use of Big Walnut Sports Park trails for a 5K Monster Dash, sponsored by Girl Scout Service Unit 184 on Nov. 1. The 6:30 p.m. event will feature prizes for Halloween costumes worn by runners. Cost is $20 to preregister or $25 the day of the event. Crystal Stonebraker is the contact at 247-8680 or crystalstonebraker@yahoo.com. Proceeds from the 5K will benefit the homeless shelter and people in need, organizer Laura Honey said.

-- Heard the Emerald Palace will undergo a sand-and-seal facelift during October.

-- Welcomed retired North Putnam Principal Alan Zerkel as an ex-officio member of the Park Board, representing the Putnam County Library Board. He succeeds Wes Wilson in the role.

The Greencastle Park Board is chaired by John Hennette with Tim Trigg, Beva Miller and Cathy Merrell as voting members. Zerkel and Wayne Lewis, representing the Greencastle School Board, are ex-officio members.