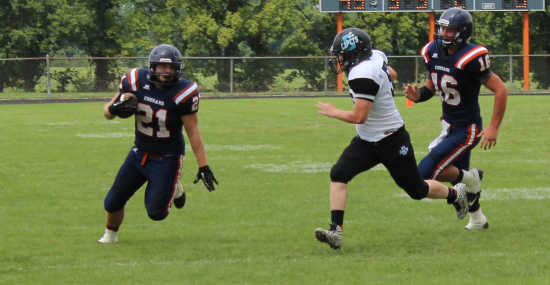 Running back Jake Riggen (21) gets the ball to the outside for 7 yards during North Putnam the win. (Banner Graphic/JOHNATHON GOODE)
Order this photo

ROACHDALE--The North Putnam Cougars' football team hosted the Cascade Cadets Friday night, but due to inconvenient weather the game was suspended at halftime.

The game resumed play at 3 p.m. Saturday and the Cougars led 6-0 starting the third quarter.

Despite getting an extra day to think about the game, North Putnam still needed overtime, but got the job done, 14-6.

"I'm proud of them for stepping up and coming back on a second day," North Putnam coach Greg Barrett said. "It's hard to do this. I'm very proud of how we handled adversity. Now it's time to get ready for the Eagles next week."

The only score of the first half came on a North Putnam scramble by junior quarterback Brad Hodges.

Late in the second quarter Hodges ran the ball from 17 yards out, but a bad snap on the PAT resulted in the Cougars only scoring six. The touchdown was set up by freshman Ethan Christy. He intercepted a pass from quarterback Sawyer Donovan and returned it 35 yards to the Cadet 21.

This is the second week in a row storms have been a factor for the Cougars squad.

Last week against Southmont the start of that game was delayed by two hours.

This week the storms came during the middle portion of the game and forced it to be rescheduled. Slow-moving storm cells at halftime, helped officials make their decision.

When the game resumed play Cascade took the opening kickoff from the Cougars at their own 24-yard line and junior Brock Stephenson could only return the ball two yards before being mobbed by Cougars.

The North Putnam defense did its job for the rest of the game and forced the Cadets to a three-and-out.

After getting a first down the Cougars were forced to punt as well.

North Putnam took the ball at the end of the third quarter on their own 36-yard line and with 11:29 left in the contest they were forced to punt.

Sophomore Jack Kendall took the snap, but a low kick allowed the ball to be blocked. Senior AJ Parsons took the ball out of the air and returned it 40 yards for the only Cascade score of the game.

North Putnam responded by posting a near five-minute drive, but, like what the Cougars have dealt with most of the season, they did not finish and had to punt it away.

"We have to start finishing our drives," Barrett said. "It's just the little things. We'll get better and we have week by week."

Late in the game the Cougar defense forced another Cadet punt. They took the ball in hopes that they would have the last possession and end the game with a score. Instead, on a third down play with a little over a minute to go, Hodges tried finding senior Daniel Huffman in the end zone, but the pass was picked off by junior Justin Phillips at the Cadet 3-yard line.

Cascade ran the ball three times trying to get some breathing room, but they only picked up five yards and because of good utilization of timeouts by the Cougars, they forced them to punt with 8.7 seconds left.

Sophomore Chase Edwards was backed five yards deep into his own end zone allowing the Cougars to bring the pressure. The pressure was brought and Edwards took a high snap that almost went through his hands and punted the ball out of harm's way, ending regulation.

Since the game was tied at the end of four quarters overtime was used to settle the debate. Each team started a drive from the ten-yard line and had four plays to score.

Cascade won the toss and deferred, so North Putnam took the ball first. On the first play Hodges was dropped behind the line of scrimmage for a one-yard loss.

Hodges made up for the loss by scampering 11-yards into the end zone on the next play. They went for two and senior Dan Smith caught a pass from Hodges in the end zone for the conversion.

This left the Cadets with the hopes of only forcing a second overtime. They ran the ball twice and gained five yards. Senior quarterback Sawyer Donovan tried passing on the third down play, but junior Trevor Bingman dropped him at the line of scrimmage.

The Cadets had one final play to score or the game was over. Donovan looked to his left and tried passing to freshman Issac Guerendo, but sophomore Corbin Judy deflected the pass and it fell incomplete to end the game.

The Cougar defense had a highlight display between Friday and Saturday. They sacked Donovan six times and three of those were by senior Nolan Ensor. Bingman also had two.

North Putnam also held a team that averages more than 200 pass yards per game to just 50.

"We're starting to figure it out and bring some pressure," Barrett said. "Trevor Bingman did a great job last night. Nolan knew he missed his opportunity for several sacks last night and he corrected his angle of pursuit and got to them pretty good. We won that game defensively. No doubt."

Christy has come on big for the Cougars in the past two weeks. Last week against the Mounties he collected a 30-yard pass on a fourth down to convert and he had the big interception early in this week's game. Christy also caught a seven-yard pass from Hodges to convert on a fourth down.

"Experience is everything," Barrett said. "Game-by-game and day-by-day in practice it starts to slow down on you the more your on the varsity field. Things are a little bit faster and harder to understand. Once you get to understanding the concept things get easier on offense and defense. He's doing a heck of a job. He's doing a lot of good things for us."

Though this game was close, the Cougars had nearly 200 yards more offense than the Cadets.

"It's all about confidence," Barrett said. "We handled adversity. Getting pressure on the quarterback helped that. We pressured them and they tried running the ball more. The pressure up front kept them from passing the ball."

The Cougars will look to build off the win and hope the momentum carries with them.

"Just keep getting better and better," Barrett said. "It's a momentum and confidence builder. You come out to practice enthusiastic and energized. It's a lot more fun at practice when you're winning games. As long as they keep doing the little things and getting better, I expect we'll do good the rest of the year.

Next week the Cougars will travel to South Putnam for what should be a good county matchup.