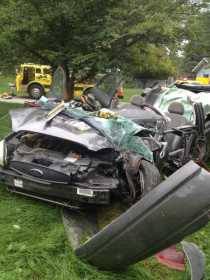 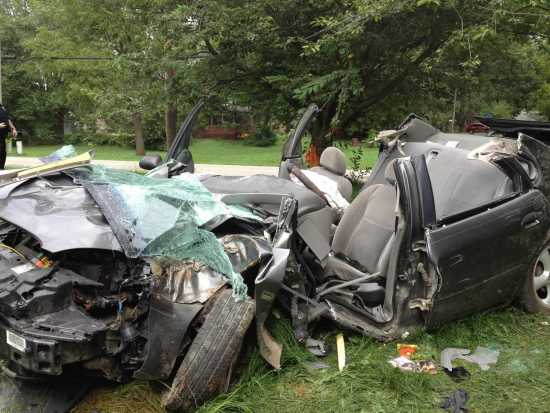 Wreckage from a motor vehicle accident which seriously injured two teenage girls, sending one to Indianapolis by helicopter for serious leg injures. (Courtesy of Mike Clark)
Order this photo

According to Sgt. Charlie Hallam of the Cloverdale Police Department, local crews were dispatched at 2:17 p.m. to the one-vehicle crash on Lincoln Avenue just south of Anna Street in Cloverdale after the Ford Taurus driven by Sandy Greene, 17, Cloverdale, ran off the road.

Hallam noted that the Ford Taurus was traveling south on Lincoln Avenue and left the roadway on the west side, striking a fiber optic box, utility pole and a tree before coming to rest.

Coinciding with witness reports, speed is said to have been an issue in losing control of the vehicle, authorities said.

Greene had to be extricated from the vehicle and was later transported via Air Evac helicopter to Riley Hospital in Indianapolis due to injuries, which were later determined to be a broken femur and tibia.

The passenger in the vehicle, Athena Blankenship, 17, Cloverdale, was originally thought to have been ejected from the vehicle. However, it was later determined that Blankenship exited the vehicle upon impact.

Blankenship was transported to Putnam County Hospital via Operation Life for treatment of a broken arm/elbow.

"Both were wearing seatbelts and the front airbags deployed," Hallam said. "Obviously, there would have been worse injuries if they weren't wearing their seatbelts." 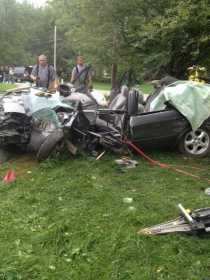 Assisting at the scene were the Putnam County Sheriff's Department, Indiana State Police and the Cloverdale Township Volunteer Fire Department.