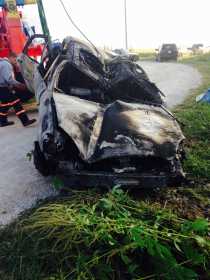 Courtesy of Kyle Gibbons A view of the vehicle after being pulled from the the tracks and onto the roadway.

FILLMORE -- At 5:12 a.m. on Tuesday, the Putnam County Sheriff's Department was dispatched to the scene of an inverted vehicle on fire with entrapment.

Deputies arrived on scene to find a 2004 Ford Taurus inverted and fully engulfed in flames on the train tracks between Old Right-of-Way Road and North County Road 425 East.

Investigating officer Kyle Gibbons stated that preliminary observations of the crash scene showed Robert "Bob" Beasley, 23, Roachdale, was traveling southbound on North County Road 425 East when he was unable to navigate a curve in the roadway.

Beasley apparently made an effort to brake in an attempt to avoid an accident, but was unsuccessful.

Deputies made an attempt to rescue the Beasley, who was pronounced dead at the scene by the Putnam County Coroner's Office, but were overcome by the intensity of the fire itself.