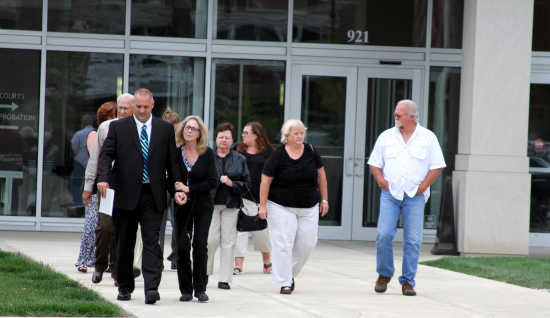 With friends and family members by his side, T.J. Smith (left) walks out of federal court in Terre Haute on Tuesday afternoon. Smith is accused of using excessive force in four different arrests.

TERRE HAUTE -- The trial of Putnam County Sheriff's Deputy T.J. Smith, who is being charged with four counts of deprivation of civil rights under color of law, began Monday morning at the U.S. District Courthouse in Terre Haute.

If convicted, Smith could face up to 40 years in prison and $1 million in fines.

Smith is being charged as part of a federal investigation that alleges that he used excessive force during no less than four incidents.

Smith is charged with four counts of deprivation of civil rights under color of law, with one count for each incident of alleged misconduct.

Smith is accused of committing these crimes between November 2011 and December 2013.

"Deprivation of civil rights under color of law is a mouthful, so I'm going to make this simple: police brutality. This case is about police brutality," Blackington explained to the jury.

Defense Attorney John L. Tompkins explained that Smith would not be innocent merely from a failure of the prosecution, but by showing that Smith had not in fact done anything wrong.

"Our defense," Tompkins told the jury, "is actual innocence."

Day one of the trial ended with a series of testimonies claiming that the use of excessive force by Smith was condoned and concealed by Sheriff Steve Fenwick.

Sheriff's Sgt. Jon Chadd and Sheriff's Deputies Phillip Troyer and Josh Boller separately testified that on Sept. 7, 2012, Smith wantonly punched Cletis Warren in the face, sending him to the hospital, even though the suspect was reportedly longer a threat to the officers after a vehicular pursuit came to a stop in a field.

Warren jumped into the bed of his truck and put his hands in the air, it was at this point that Troyer and Boller restrained Warren and handed him outside the pickup to Chadd and Smith.

"I heard a pop, like a tomato hitting a wall," Troyer said of the moment Warren was handed over to Smith, though no officer actually saw Smith deliver the blow.

According to testimony from Troyer, Boller and Chadd, Smith not only admitted to punching Warren in the face, he bragged about it.

Both Troyer and Boller testified that Smith harassed them for months because they'd told him they wouldn't have punched Warren.

Chadd, Troyer, Phillip and later Sgt. Charles Hallam of the Cloverdale Police Department, individually testified that they viewed the punch as unnecessary and that they were told to make false statements exaggerating the event to provide justification for Smith's punching of Warren.

Troyer explained that he was told by his superior, Chadd, what to write on the report.

Furthermore, several witnesses provided testimony that Fenwick knew of the alleged misconduct but tried to hide it.

"I was ordered to do so," Chadd said regarding the falsifications.

Chadd also testified that once Fenwick arrived on the scene after the chase, and after the punch, that Fenwick said to him "he should've struck him in the other eye."

This was later corroborated by Hallam, claiming he'd heard Fenwick say "he should have been punched him in the other eye," according to testimony given Tuesday.

Also during Tuesdays proceedings, Sheriff's Deputy Mike Downing told the court that he had seen Smith playing the dashboard video of the punch for a group of officers in the sallyport later the same evening as the incident.

Downing and a crowd of "a half-dozen officers" crowded around Smith's vehicle as he played footage from just hours earlier but Downing was crowded out by the group before seeing the entire video.

Downing told the court that he assumed he would watch the video later, although that opportunity did not present itself and he never saw the video.

When asked by the prosecution what the general response was of the officers who had seen the footage, Downing replied with only one word.

When asked if he could elaborate, Downing reiterated, "just, wow."

While attempting to clear space on the memory that stored that video, another officer accidentally erased the footage and no back up could be found. This rendered any possible confirmation or defense of the actions through video impossible as no other vehicle had captured the incident on camera.

In the court room, Smith would occasionally look to the 10 or so supporters of friends and family that filled the benches on the left side of the courtroom like a family choosing sides of an aisle at a wedding.

The words "unnecessary," and "excessive" have become popular terms in the courtroom; with either direct testimony or through witnesses agreeing when asked if the force used by Smith crossed the line.

Additional allegations hold that Smith unnecessarily used a taser against an individual after the individual been restrained; throwing a handcuffed, non-combative individual to the ground and driving a knee into their back with enough force to cause involuntary defecation and reportedly throwing a female to the ground and placing her face down outdoors in a a bed of lava rocks in below-freezing temperatures while handcuffed.

With the burden of proof lying on the shoulders of the U.S. Attorney's office, Blackington and Mary Ann Mindrum have the burden of setting the scene of each event, describing the environment and painting a picture of each incident for the jury.

The defense, needing to raise reasonable doubt, addressed witnesses to raise questions about testimony to highlight the unknowns and to address the credibility of witnesses.

The back and forth provides a rhythm of expansion from the prosecution and a whittling away by the defense that is currently pacing the trial quicker than anticipated and is ahead of schedule for the week.

The trial will continue at the U.S. District Courthouse in Terre Haute from 9 a.m. to 5 p.m. and is expected to finish Friday but may finish earlier depending on how the court functions in the coming days.