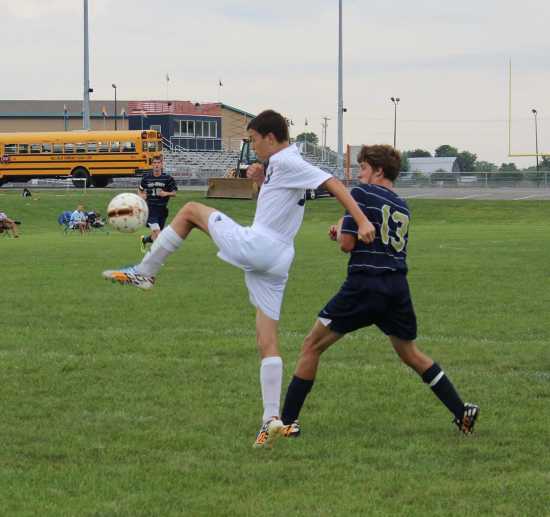 Sophomore Cougar Nick Young (white) clears the ball away from Tri-West early in the first half. (Banner Graphic/JOHNATHON GOODE)

"They're not second ranked in the state for nothing," Cougars' coach David Moeller said. "The biggest difference between us and them is that they have a youth program. They've all played with each other for a while. They're just more experienced than us."

The Cougars played well defensively in the first half and only allowed four goals. Junior goalkeeper Bailey Allen played king of the field by recording 19 first half saves and won the compliments of the referees.

"He played really well first half, amazing actually," Moeller said. "He's just got the natural ability. He's got good size for a keeper and good speed. When he's focused he does really well and stops a lot of shots."

The Cougars did not generate enough offense and could not get a shot off.

Nearly halfway through the second half, the Cougars only down 6-0, Allen went down with an injury after making a hard save.

Allen's injury resulted in fatigue by him and the rest of his team and Tri-West took advantage and rattled off 10 straight.

"We were worn out," Moeller said. "Once we got down 10 goals we kind of lost focus. We played well defensively in the first half, 4-12, though, we didn't play well in the second."

Between 14 and 15 minutes left to go the Bruins scored three goals and twice more they scored two goals in a minute.

The final two goals came with 1:27 left to go and 1:11 left to go for the Bruins. Junior Ryan Duffy took a ball from senior Donnie Hott and placed it in the net and Hott took the next goal by himself.

Ten of the 16 goals that Tri-West scored were assisted.

Four players scored more than one goal for the Bruins. Senior Lucas Brown was the only player able to pull off the hat trick. The first two goals of the game were both scored by Brown.

The Cougars will take place in their first conference meet of the season Thursday night against Greencastle.