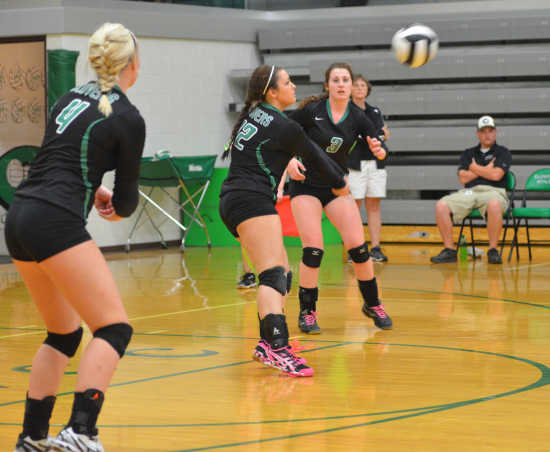 Cloverdale's Savannah Jones moves to return a ball to the Lady Patriots during the first game Tuesday. (Banner Graphic/TRENT SCOTT)

Cloverdale head coach Kathy Moore said that matches with the Patriots have been nothing short of barnburners. 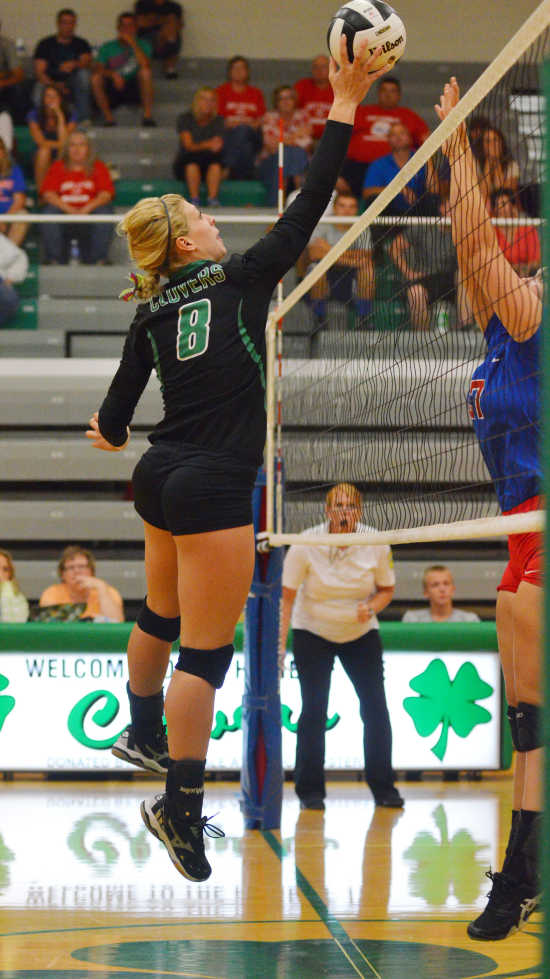 "Every time we play Owen Valley, it's a battle," Moore said. "Owen Valley dug up everything and they played very well.

"I thought our kids played well in stretches but it's a matter of maintaining consistency and keeping your head out of a fog during long volleys. We had some pretty good digs but had some serving errors in the fifth set that you simply can't have."

The Clovers swung out of a 5-0 deficit early in the first set to take a 6-5 lead and ground out points with the Patriots for most of the opening round.

Moore said that getting an early set was important after struggling to do so in their previous two matches.

"We've struggled with getting out in front recently," Moore said. "In the last couple of matches, we've gotten into such an early hole that it's difficult to persevere.

"We managed to get off to a lot better start tonight. We've played good teams recently and if you get in a hole, teams are likely going to beat you."

Owen Valley returned the favor in the second set after trailing 5-0 and 10-6 to the home side.

The Patriots scored eight straight points to take a 14-10 lead and though the Clovers closed the gap to two points, the visitors held on to even the match at 1-1.

Sets three and four mirrored each other as well as Cloverdale grabbed an early lead in the middle round and kept the lead between three and five points to grab a 25-21 win and a 2-1 lead.

Owen Valley grabbed the lead early in the fourth set but found the home side hard to put away, seeing an eight-point advantage at 18-10 dwindle away until the Clovers closed to within one at 24-23.

Jaydyn Henson stopped the late surge with a powerful kill that finished the set 25-23 in favor of the visitors, setting up a tense final set for the match.

While the squads waited for confirmation on who would take the serve, Moore said the girls were quickly rallying after the fourth set loss.

"The first thing we let them know is that we expect them to play better and you expect a win," Moore said. "That's the expectation around here.

"I expect excellence every time the girls walk out on the floor. I also expect that we always have a chance of winning, even if we're down, and that the girls do their best."

Moore was particularly perturbed by three service errors that could have cost the squad a victory.

"I told the girls during one of the timeouts that we could not have a service error in that set," Moore said. "The points are too short and to give up points like that is just unacceptable.

"We want the ball over the net every time during the fifth set and let the other team make the mistake."

The decisive run for the hosts came when trailing 9-8 as the Clovers scored four straight points to take a 12-9 lead.

A pair of Patriot errors left the home side needing one more point to win at 14-10 and Lexi Branneman finished the game with a kill to seal the five-set win for Cloverdale.

Branneman's final kill was her 16th of the game to go along with a team high three blocks. Bailee Stevens added 13 kills, 10 points and 10 digs to the cause while Jessica Winders had 21 assists and 20 points.

The win gives Cloverdale a boost heading into the Putnam County Tournament Saturday as the Clovers face off against South Putnam in the opening round.

Moore said that the Eagles would be no pushovers and that the squad needed to be prepared for a stiff challenge.

"I am concerned with getting past South Putnam," Moore said. "That's our first goal and we'll worry about what comes next if we get our first step out of the way.

"Our focus has to be on South Putnam," Moore added. "We cannot look past them because if you look past a team, any team can beat you."