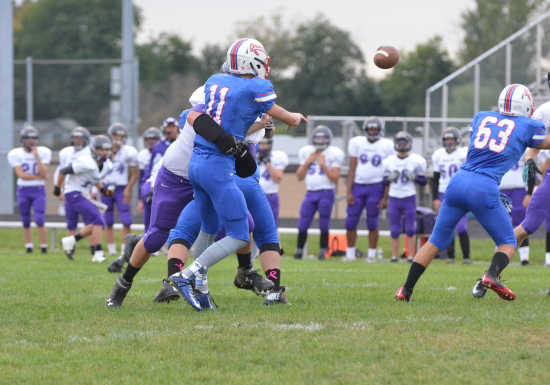 Austin Mitchell of Greencastle makes a hit on the quarterback during the big loss. (Banner Graphic/TRENT SCOTT)
Order this photo

The fourth game of the season has been a rotating door in recent seasons as Greencastle's football team played its fourth different opponent in as many seasons when the Tiger Cubs traveled to Class 3A No. 7 Indian Creek Friday night.

The Braves utilized a bruising running attack that amassed 301 yards, with 220 yards coming from tailback Dokken Egenolf alone, to hand the visitors their fourth loss of the season 47-0.

"They had tall receivers on the edge but they didn't need to use them because Egenolf had a great game. They are a sectional championship-winning squad and we played a tough opponent tonight."

Indian Creek received the opening kickoff and scored nine plays later after Gynson Robley threw a bubble screen to Jake McGowan, one which McGowan ran in from 36 yards out to give the hosts a 7-0 lead.

Egenolf scored the next three touchdowns with his first coming on a 42-yard run through the heart of the Greencastle defense to increase the lead to 13-0.

The Braves scored next to cap off an eight-play, 87-yard drive when Egenolf scored on the second play of the second quarter, this time from 25 yards out.

Egenolf would cap the first-half scoring with a 2-yard plunge midway through the quarter after the Tiger Cubs failed to take advantage of the first of three Robley interceptions, a deep ball snared by Ryley Cook.

The visitors could not take advantage of Robley's second interception, an overthrow Chase Chew nabbed, either as the half ended with Indian Creek leading 27-0.

While the offense wasn't able to push deep into Indian Creek territory, Spoonmore pointed out that the attack was getting off some good plays against a stout Braves defense.

"Our guys are fighting," Spoonmore said. "We made some mistakes but we're getting better and it showed.

"We had some big plays and had the chance to make other plays but didn't. We have to keep getting after it and go back to work."

Greencastle had a chance to put points on the board early in the second half after Robley's third interception, a tipped pass grabbed by Cole Edgar, set the visitors up on the Indian Creek 14-yard line.

The promising position was lost after Nick Costin was sacked on the second play and a 36-yard field goal attempt instead turned into a Costin interception after the snap was bobbled.

Robley would get his second touchdown pass three plays later by connecting with Bryce Hogue for a 58-yard score for a 34 advantage.

Nic Brown would go on to score on a 56-yard run and Taylor Voris threw a seven-yard touchdown pass to Austin Coy to add gloss to the scoreline in the fourth quarter and complete the 47-0 victory for the Braves.

The loss was the largest of the GHS season and Spoonmore was interested to see where the team would be at Monday.

"Our attitude has gotten better as the season has gone on," Spoonmore said. "I believe the guys are starting to understand what we want to do as a team and keep working every day, taking it one day at a time.

Greencastle's offense found the going very slow throughout the game as the Tiger Cubs only gained 191 yards and while Spoonmore said there were mistakes that were made, Indian Creek made things difficult as well.

"When they blitzed us, they caused us some problems," Spoonmore noted. "They had a scheme and knew when to come after us to take advantage of our youth.

"I thought we still battled. We made some plays and had opportunities to make more. That's what film is for and we'll learn more tomorrow."

With their next chance to get that win coming against the Eagles at home, Spoonmore said that continuing to plug away at practice would be key in their WCC opener.

"I expect us to get better at blocking and tackling this week," Spoonmore said. "We've got to get back to the basics and clean up some mistakes we made tonight.

"We tell these guys the most important game is the next one. That happens to be South Putnam which is a big rivalry game.

"I know some of the guys down there and they're good guys," Spoonmore added. "We're going to go to work and it will be a good game for Putnam County on Friday night."