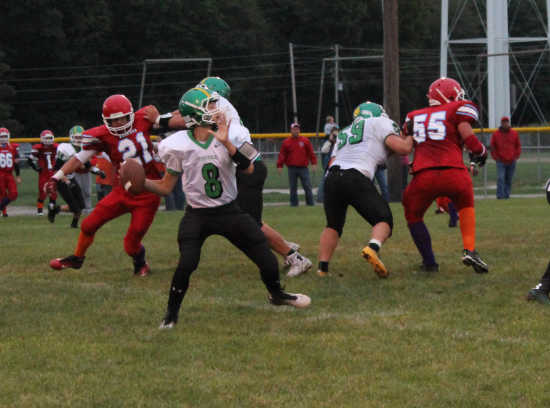 MARSHALL--The Cloverdale Clovers' football team traveled to the home of the Turkey Run Warriors on a chilly Friday night. Six turnovers put the Clovers in an unwinnable situation as they lost, 12-6.

At one point Clovers' (1-3 0-0WCC) freshman quarterback Drew Boyette threw four interceptions on four straight passes. The final offensive play for the Clovers resulted in an interception being thrown by senior Brandon Hughes.

Cloverdale's defense was more than stellar as it only allowed 89 yards on the ground and 133 yards total. Junior Brayden White and senior Tyler Lotz each stacked up the tackles category with 10 each.

"They gave us a chance tonight," Duff said. "We turned the ball over too much. We weren't able to consistently move the ball. When we did, we would shoot ourselves in the foot with a penalty or a turnover. Our defense kept us in the game tonight. They did a good job."

Cloverdale running back Ethan Boyd carried the ball 33 times for 159 yards. He averaged nearly five yards per carry in the second half.

"He's a great person," Duff said. "He's a great kid. He's not the biggest guy in the world, but he runs with a lot of heart. He's a hard-nosed person. He's one of our leaders and definitely leads by example."

Boyd scored the only Clovers' touchdown of the night on a two-yard run with 2:49 left to go in the game. The PAT was blocked.

The two plays that beat the Clovers were a 12-yard touchdown completion by the Warrior's (1-3 0-2 WRC) junior Tyler Davis and a 40-yard fumble recovery by junior Chayne Bollinger. The first came with 2:41 left in the second quarter and the final score came with 7:49 left in the game.

The Clovers will travel to Cascade next Friday for their first conference matchup of the season.