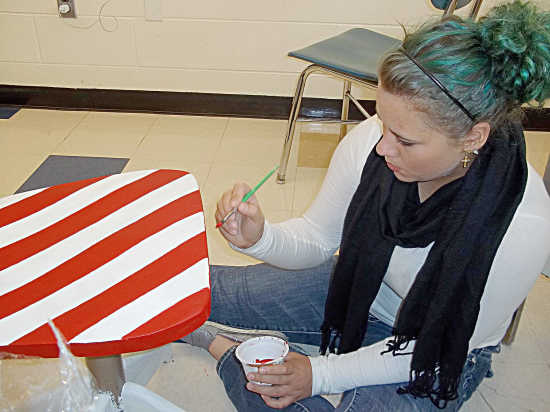 The annual Chairish the Children Silent Auction, set for Saturday evening during the Taste of Putnam County event, is in its fourth year of not only raising funds for Putnam County Family Support Services, but also in providing an outlet for local artists to display their talents.

With nearly two dozen chairs available, bidders and diners at the Taste event will have the chance to see the work friends and neighbors have put into the various creative designs.

The auction will take place from 4-7:30 p.m. Saturday at the Putnam County Airport Dixie Chopper Business Center. Winning bids will be announced at 7:45 p.m.

Among the designers this year are 10 students from Brittney Nees's advanced art class at North Putnam High School. With six chairs up for sale, the class ranks behind only Putnam County Hospital's 11 submissions as the second-biggest supporter of the event in 2014.

Nees formerly taught at Logansport, where her students took part in a similar event, so she was excited at the opportunity Chairish the Children presented.

"The kids were really excited about getting involved with something where they could support the community and do something beyond themselves," Nees said.

Besides the most important factor of supporting PCFSS and its goal of preventing child abuse and domestic violence, the auction also gives the art students a chance to have the fruits of their work seen in public.

"Everybody has done a really good job and put in a lot of time," Nees said. "They are excited to see what the chairs will sell for."

Possible sale value was one thing on the students' minds as they come up with their designs. While they know not to expect any money, the return the chairs bring for PCFSS is important.

The recent death of Robin Williams prompted sophomore Kaylynn Abner to design a tribute to the comedian and actor.

"I was trying to think of something people would really buy," Abner said. "Robin Williams was such an icon that I thought people would want it in their home. I thought it would be more memorable."

A wooden rocker that Abner decorated along with classmates Lauren Freije, Nikita Miller and Abigail Skillern, the chair features Williams' name across the back, along with tributes to his various roles on the seat, arms, spindles and other boards (including vertical supports decorated as Mork rainbow suspenders).

Besides two weeks of work in class by the four students, Abner also put in a pair of 10-hour Saturday work sessions at home.

Abner said she is proud of her work, especially knowing it's going to help the children of Putnam County. 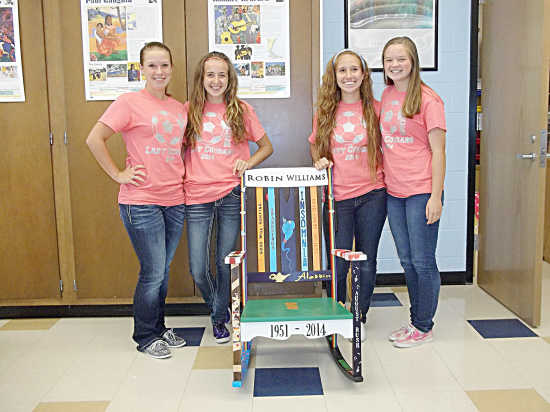 "I think that's awesome because the more you can help people -- just by doing something fun -- it makes me feel really good about myself," Abner said.

Junior Kasie Reeves went solo for her project, taking an old, wooden desk chair and giving it a patriotic theme.

Reeves describes her family as political and patriotic, so she took the seat and turned it into a field of red and white stripe. Rather than painting white stars over the blue on the back of the chair, Reeves chose to paint one large star and "1776," in honor of the United States' founding.

After a challenging paint job, though, Reeves felt some reluctance to sand the corners and give the chair its rustic look.

"I was really unsure about it (the sanding)," Reeves said. "The blue didn't take well at all and then it took so long to get the stripes straight that I didn't want to sand it away.

"Family Support Services has been really helpful," she said. "I see a lot of people going in and coming out who benefit from it."

In addition, the North Putnam advanced art class has four other chairs in the auction: "Cougar Football" by Max Haste and Luke Mitchell, "Playful Design" by Jordan Bean and Trey Clodfelter; "Dogtooth Pattern" by Haley Abdon and Whitney Pope and "Enchanted Forest" by Cheyenne Myers.

Proceeds from the Chairish the Children Silent Auction will benefit the PCFSS Family Ties Storeroom, an "earn while you learn" program that provides families enrolled in the Health Families program with "baby bucks" that provide a dollar-for-dollar disbursement on items such as diapers, wipes, laundry detergent, cleaning supplies and child safety items.

Chairs have been on display in the front windows of the Family Support Services offices at 22 W. Washington St. Early bidding is available in person through the end of the business day on Friday.

Putnam County Family Support Services can be reached at 653-4820.

Click here for a look at more of the chairs available Saturday at the Chairish the Children Silent Auction.