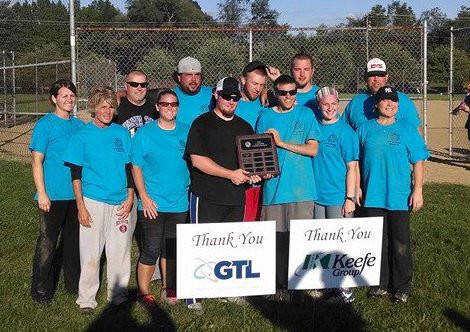 The PCF poses in the winners circle after earning the softball championship. (Courtesy Photo)

It was tough game against Wabash Valley Correctional Facility that helped the "Farm" capture the annual DOC Softball Tournament for the fifth year in a row at Hummel Park in Plainfield.

With a score of 15-7, Putnamville Correctional Facility (PCF) dominated the score to win the championship again.

The Stinger and Dingers team from Putnamville was just one of the 16 facilities with teams entered in the tournament and surprisingly started the season by losing to Wabash Valley in the first game. Putnamville ended the season with an 8-1 record, including winning six games in a row by the 10-run rule.

Ryan Nicholson scored the most home runs throughout the 2014 season and Kimberly Chaney was awarded the Sportsmanship award.

"We strive to be represent our facility and workplace with pride and effort," Superintendent Stanley Knight said.

Lunch was provided by Aramark and the annual tournament was sponsored by GTL, Keefe Group and the Correctional Professionals Assistance Fund of Indiana (CPAFI).