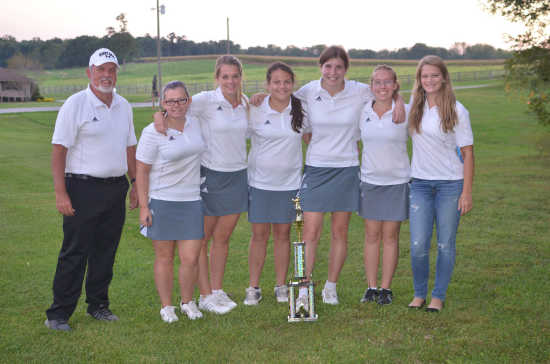 The Tiger Cubs won the WCC match last season, only to watch as Cloverdale took home the title of Putnam County champions.

There would be no repeat for the Clovers, though, as Greencastle topped the county field with a score of 205, followed by a 210 from the hosts, North Putnam's 215 and South Putnam's

Lauren Bridgewater took home medalist honors with a round of 47, followed by North Putnam's Olivia Zarate and Greencastle's Lokysa Scheuermann, both of whom shot 48.

Behind Bridgewater and Scheuermann, Macey Masten shot 50, Haley Cash carded a 60 and Alex Weliever came in with a 63.

Tiger Cub head coach Bob Hedge pointed out that the parallels between the two county contests were too similar for his own liking but the scores in the fourth and fifth positions dropped enough from last year to secure a win.

"It was way too close and I thought what happened last year was going to happen to us again," Hedge said. "Cloverdale had close scores again as did North Putnam.

"Haley Cash played pretty well today and lowered her score by 13 strokes over last year, which made the difference for us today. We had a week to prepare but maybe we were rusty because we didn't play well at times."

Cloverdale was paced by Anna Spencer and Harlee Fuetter, both of whom shot 51. Abbie Speas carded a 53, Abby Walker added a 55 and Hannah Nichols 58

Clover head coach Matthew Langdon also noted that the scores were tight throughout the team and that the girls made a strong charge for the title.

"We would have liked a different result," Langdon admitted. "We've done this the last couple of years where we've brought in four very close scores that would allow us to get close to that 200 mark to be competitive.

"Two-hundred and ten ties a season best for us. Usually, there might be some higher scores because of the added pressure, but I couldn't ask much more out of my girls to go out and match their best score of the season."

Jessie Cox backed up Zarate's low total with a round of 52, followed by Emily Eltz's 56, Emily Harrington's 58 and Taylor Dixon's 59.

Cougar head coach Linda Patrick got a strong response from the team after a disappointing night Wednesday at the same course.

"This is our lowest team score of the season," Patrick noted. "Compared to last night, we dropped nearly 30 strokes playing the same holes.

"I didn't talk to them too much on the bus but told them I had some models on the bus and I wanted them to read one and take it to heart and they did that. We knew this was the last meet of the year and our seniors had goals to be all-county, which they both were and we're happy for them.

"We switched the position of a couple of girls with the thinking that it might help them shoot better than they normally do and they did," Patrick added. "I don't know what the magic was but it was an excitable moment for the girls and good way to end their season."

South Putnam was led by Alicia Haywood's round of 55. Carlee Schlatter carded a 62, followed by a pair of 70's from Israel Polster and Kristi Wood.

Eagle head coach Kevin Metz said the squad didn't quite match the score from last night but would be quickly changing focus to the sectional.

"I think the girls are a little disappointed with their scores compared to the other three schools," Metz said. "We've had three straight matches out here and I can tell the girls are getting a little bit tired as the week has gone on.

"The scores were a little bit higher compared to last night but we'll come out and practice tomorrow and get them mentally prepared for Saturday. For a couple of the girls, it will be the second time they've played 18 holes, so we'll talk about the fact that it's a longer day and making it through with a better score than at the conference match."

South Putnam, along with Cloverdale and Greencastle travel to Brazil Saturday for the IHSAA Sectional at Forest Park Golf Course.

Langdon said that the squad would be aiming to drop their score from the WCC match.

"Our 18-hole scores have tended to be higher so there is some room for growth," Langdon said. "We've played a couple extra 18-hole rounds this year, so we're looking for improvement.

"It's a tough sectional but I think that if each girl goes out and improves on their conference score, we can see a much lower team score over 18 holes. That will help us this year and in future years."

Hedge said the girls would be aiming for sports at the regional at Smock Golf Course but added that getting there as a team would be tough.

"We would love to get through as a team but we'll have a hard time getting through without a low fourth score," Hedge pointed out. "We're still hoping for that and I think it's still possible.

"If that does not happen, we still want to get two or three through as individuals and on to the regional."

North Putnam, meanwhile, heads to West Chase Golf Club in Brownsburg Saturday and Patrick said that she wanted to see have an enjoyable day on the course.

"We're facing some big schools over there and we're not going over with expectations of coming out ahead on anything," Patrick said. "It's a different course with lots of sand and they'll have to play differently.

"Only two of the girls played the course last year and the other three girls are going to be totally new to it this year. I want them to go over, have fun and do their bests. That's what they need to do for me."