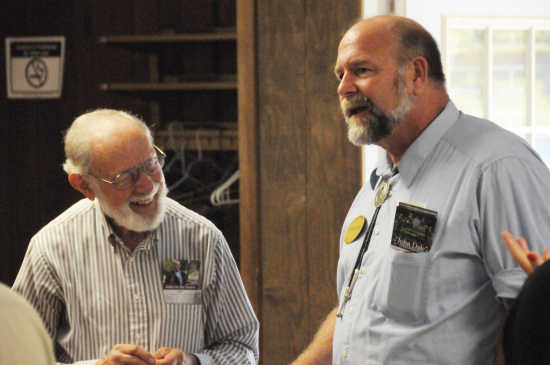 ROACHDALE -- Coffee and lemonade were served alongside politics at the Roachdale Meeting House Thursday evening as John Dale, District 4 Democratic nominee for the U.S. House of Representatives, came to speak with voters.

Dale's first trip to Roachdale was geared toward meeting voters, getting them to discuss the issues he thinks are both important and problematic in Congress.

With former potential nominee and Putnam County resident Jeff Blaydes -- who lost to Dale in the May primary -- on hand Thursday evening to support his one-time opponent, Dale discussed the issues.

"The biggest problem with Congress is they're not working together," Dale said about the infighting that he believes is preventing progress.

In addition to bipartisanship, Dale spoke from his experience as both a farmer and a politician who actually lives in the district for which he is running, the 4th District.

Dale, a Wabash College graduate who teaches high school and operates a 240-acre family farm at Westpoint, spoke of "talking to the other side" as something that current members of the House do not do, and something that he wants to change.

He also discussed providing options for workers, be it through unions or through non-union jobs he spoke of wanting to see employees being treated more fairly.

Even in a recession, Dale pointed out, CEOs of companies received pay raises while the average employee did not.

With 24 years of teaching social studies and government at Western Boone High School, Dale has strong opinions about education, taking the stance that the state is micromanaging schools and that it is harming students' education.

Dale also spoke from his experience as a farmer, the need to support the farming industry by continuing to invest in technologies and to protect waterways.

Dale will continue to spend his days traveling the 16 counties that make up the 4th District knocking on doors, meeting voters and making phone calls to drum up support for his campaign against incumbent Republican Todd Rokita until the Nov. 4 general election.