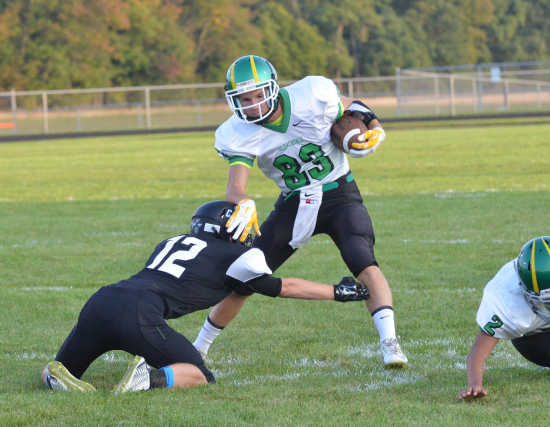 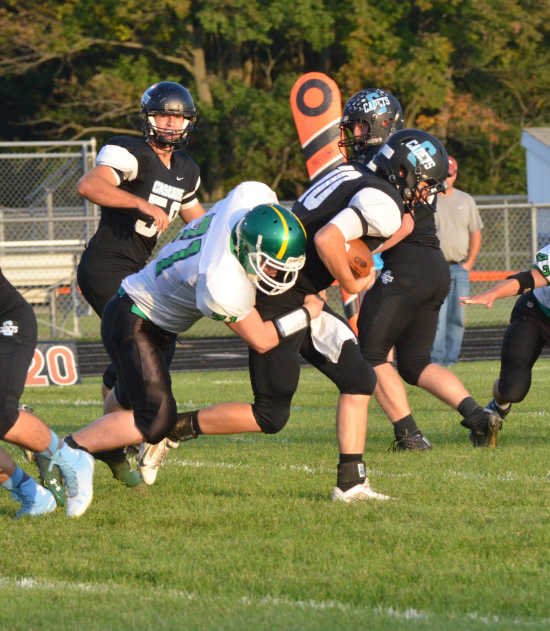 Cloverdale defensive lineman Ethan Radford throws Cascade quarterback Sawyer Donovan for a loss Friday. Despite another solid defensive effort from the Clovers, they fell to the Cadets 14-6. (Banner Graphic/TRENT SCOTT)

Four turnovers and two empty trips to the Cadet red zone scuppered those plans as the Clovers fell in a tightly contested match-up 14-6.

Cloverdale head coach Jarrod Duff said the squad and the coaching staff were hurting after the falling for the fourth straight game.

"I'm hurting for the kids," Duff said. "They played their hearts out and gave me everything that they could give me.

"They're upset. They gave me everything as far as effort. I love them, I'm proud of them and I hurt for them."

Both teams struggled early to make headway as each side committed a turnover to end promising drives and it was not until the second quarter that the game came to life.

Cloverdale took advantage of Cascade's sole turnover of the game by driving 42 yards on 11 plays, finishing with an Ethan Boyd dive into the end zone that gave the Clovers a 6-0 lead.

The Cadets responded by taking the ensuing kickoff to the Cloverdale 31-yard line and scored seven plays later when quarterback Sawyer Donovan ran in from five yards out to take a 7-6 lead.

The visitors looked to take the lead back with 4:27 to go before halftime but a fumble with a minute left to play ended the drive and sent the teams into the break.

While the Clovers trailed by a point, Duff felt like the scoreline didn't give his team enough credit.

"It's the same story this week as it has been before," Duff said. "We drive the ball down inside the 30, the 20, the 10 and we're not getting enough points out of those drives.

"We made too many mistakes and didn't take advantage of drives," Duff added. "We didn't put the ball in the end zone enough.

"Our defense played great pretty much the whole night. We had a couple of breakdowns but we played well otherwise."

Cloverdale received the ball coming out of the interval but went three-and-out and handed the hosts excellent field position after a botched punt.

Cascade, however, could not profit from the 12-yard line, botching a field goal attempt and allowing the Clovers to escape their predicament.

The hosts would not be denied on the next possession as Dylan Musgrove rumbled in from 21 yards out to put Cascade ahead 14-6.

Cloverdale quickly moved into the Cadet red zone after a 43-yard pass play from Brandon Hughes to Max Secrest but after having first and goal from the eight, failed to produce any points as a fourth down pass from Hughes was intercepted in the end zone.

The Clovers were back soon, benefiting from two Cascade personal fouls to move to the Cadet 12 yard line but again stalled out and turned the ball over on downs.

Cascade proceeded to get out of danger after Donovan hit A.J. Parsons for a 33-yard gain and Musgrove reeled off a 25-yard run but could not secure the game after Mitchell Cooper's field goal was blocked.

Cloverdale had little time to move the 72 yards required and the game finished with Hughes' third interception of the game and a knee by Donovan.

With the squad having lost its fourth straight game, Duff said that the coaching staff needed to iron out some long-standing on-field issues.

"I have to do a better job as a coach of figuring out what we need to do to correct some of the mistakes that we repeatedly make," Duff said. "I say that all the time that it falls on me as head coach and we as a coaching staff need to get that figured out."

Cloverdale returns home for homecoming next Friday, hosting South Putnam in its first county match-up of the season.

Duff said that getting a win over the WCC-leading Eagles would require the elimination of the mistakes that plagued Cloverdale against Cascade.

"I think that we, as a team, need to make fewer mistakes," Duff said. "I don't have a complex answer or a complex solution.