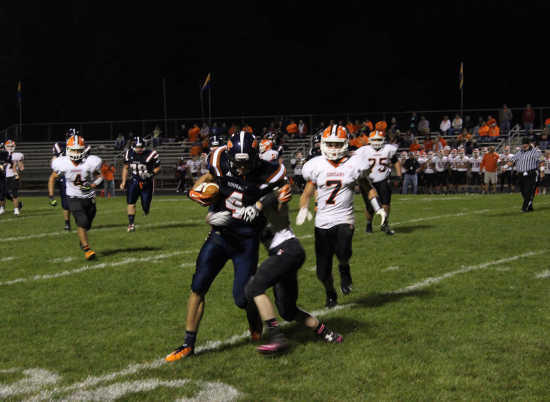 Daniel Huffman makes a grab and fights for a few extra of his 95 receiving yards. (Banner Graphic/JOHNATHON GOODE)

ROACHDALE--The North Putnam Cougars football team is a team that improves, considerably, week after week and does not give up after a tough week. They learn from their mistakes and display it the following week. 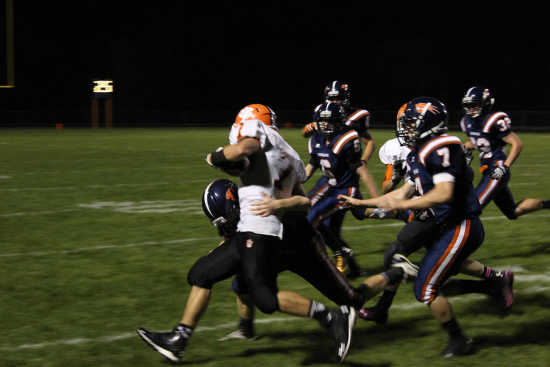 A host of Cougars (NP) gang up to tackle a North Daviess ball carrier for a loss. (Banner Graphic/JOHNATHON GOODE)

This week was no different from any other. After being blown out at South Putnam last Friday, the upset-minded Cougars (2-3, 1-1 WCC) pulled off the 14-13 win over the North Daviess Cougars (3-2 1-1 SWC).

The game came down to one drive with roughly eight minutes left in the game. The Cougars of North Putnam were driving at the North Daviess 40-yard line, down 13-7, when quarterback Brad Hodges threw a pass right into the hands of Clay Wilson of North Daviess. Wilson had nothing but green in front of him and had the game-clinching touchdown, but he dropped the ball where he stood.

Four other times a play like this occurred for North Daviess throughout the game.

"That's a huge relief," North Putnam's coach Greg Barrett said. "They were making plays and we were making plays. That was a great game tonight. I told these guys early on that we had to sustain a drive and score a touchdown. I think this drive was huge for us."

Instead of being hesitant like most teams would, North Putnam kept with its game and Hodges took advantage of Wilson leaving junior Cameron McPherson open in the end zone. The pass was for 25 yards with eight minutes remaining. Senior Daniel Huffman knocked in the PAT to take the lead.

"We're just getting better," Barrett said. "We're focusing a lot better. Each week we gain experience. We had a lot of things going well for us."

On the ensuing North Daviess possession senior quarterback Doug Bays threw one of his three interceptions for the night to Huffman. Huffman took the ball to midfield. That was his second interception of the night.

"He's a rookie player. He's never played football before," Barrett said of Huffman. "He played possessed tonight. He's figuring out he's a heck of an athlete. He's getting better each week. It comes down to experience and he's getting the experience to become a very good player."

After Huffman's interception, the Cougars drove the ball down field by means of running and took valuable time off the clock. They converted on a fourth-and-one situation that sealed the game.

Both teams scored on their first possession of the game. North Putnam took the opening kickoff and capping off a nine play, 86-yard drive, junior Blake Everts ran the ball in from 42 yards out. Huffman's extra point was good.

North Daviess started on its own 35-yard line before driving the ball to the Cougar side of the field. Bays took a pass from Jacob Reed from nine yards out to tie up the game with 7:08 remaining in the first quarter. Hayden Norris knocked in the extra point.

Ten seconds into the final quarter of play, North Daviess tacked on another score. Instead of letting the clock run out in the third quarter, Bays kept the ball and ran 46 yards up the Cougar sideline to the Cougar 43-yard line. On the next play he ran it 43 yards for the score.

"Our team stayed very composed," Barrett said. " I think they have all year. They've never put their heads down."

The deciding factor of the game resulted because of a high snap. Instead of kicking the ball, North Daviess had to throw a ball that fell incomplete. The drive only resulted in six points.

Each week new players step up for this North Putnam team. Although his play cannot be recorded in the stat book, sophomore Justis Laffin, who got his first career start, made several great defensive efforts that kept North Daviess from catching passes. He undercut throws and finally he picked off Bays in the second quarter.

"Justis played phenomenal tonight," Barrett said. "He's a sophomore stepping up and getting his first start. We knew he could do it. We expected this. He had a great week at practice. He's got a good nose for the football. I'm very proud of him."

North Putnam hosts arch rival Greencastle next week for homecoming. The Cougars hope to use this win as momentum for that game.

"I told them to enjoy this win tonight," Barrett said, "We got to move on and keep getting better. Greencastle's always been successful. It will be a big game for us next week, as well."