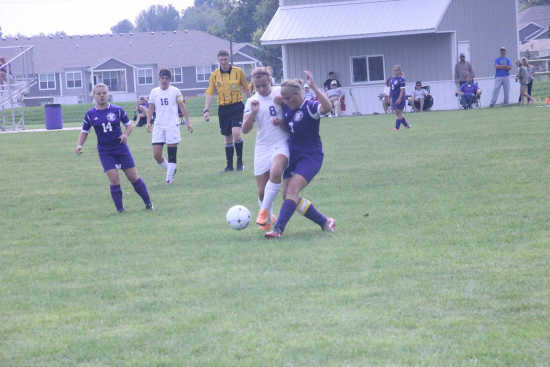 Grace Gillen (8) fights to get the ball for the Tiger Cubs. (Banner Graphic/JAY LOCKETT)

The first soccer match at Greencastle started at 10 a.m. and featured Sullivan taking on the Tiger Cub boys. The home team jumped on the visitors early and controlled the flow of the game throughout beat the Golden Arrows 3-1.

"Were starting to find the back of the net," Tiger Cub coach Cody Watson said. "We have three games left before sectionals we are really trying to get our finishing up there."

The excitement started early for the Tiger Cubs. Just four minutes into the contest a well placed pass by Zach Wilkerson found Evan Crowe for the early lead. 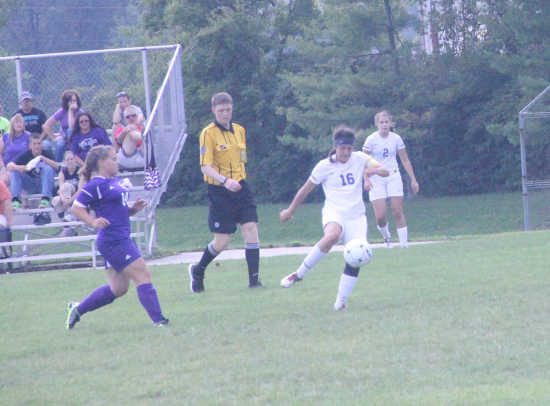 Greencastle's Sydney Secrest (16) controls the ball in order to get a shot on goal. (Banner Graphic/JAY LOCKETT)

Sullivan countered later into the half when after a long series of posturing by both teams Sullivan was able to work the ball into scoring position and tie the game 1-1 with 14 minutes in the half.

Greencastle continued to work and it paid off when Derek Query found himself one-on-one with the goalie and faked him out to put the ball into the net. The home team went into halftime up 2-1.

The Tiger Cubs worked hard at keeping control of the ball. Wilkerson as always was a factor as well as Seth Nichols and Cameron Hinton. 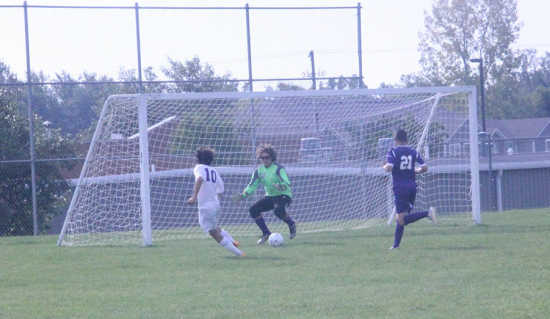 Derek Query (10) squeezes one past the goalie for a Tiger Cub score during the first half of Saturday's win. (Banner Graphic/JAY LOCKETT)

It was with 26 minutes to go when a well placed pass from Justin Hartman found Wilkerson in the corner and he was able turn the pass into a score. This was Hartman's second assist of the game and the final score.

"We really just need to keep up the intensity," Hinton said. "We've been doing well but there are some games that we do fall down. But every game we work hard and we're able to get back into it."

This was the second straight time that the Greencastle team played great defensively. They held Lebanon to a 0-0 tie on Thursday. 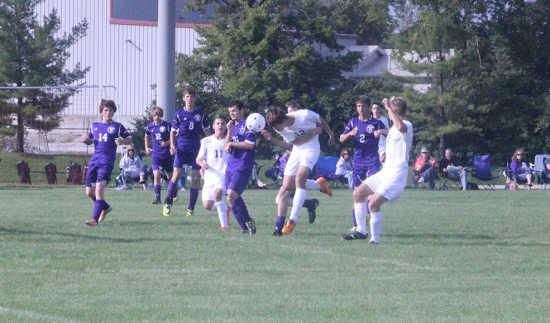 "We're really trying to make sure we have the overall effort," Waston said. "Defensively we held Lebenon to a shutout. It went well. Today we were trying to get a goal. Sometimes keeping up our offense sure out our defense."

The Tiger Cubs play Edgewood on Tuesday and then it's two home meets before the post-season play.

The Greencastle girls' soccer team notched a home win before a week of away matches. They took on Sullivan and ran the field all game winning 3-1. The team was active throughout and controlled the second half after jumping to an early lead.

"With it being three-quarters into the season and with us getting ready for sectionals I'm talking about making the smart choices," GHS coach Angela Weeks said. "I'm talking about life choices. Showing up believing in themselves and showing up to give 110 percent intensity. Not waiting until the second half."

The second soccer match at Dee S. Monnett field saw the Lady Tiger Cubs being as aggressive as can be. This aggressiveness led to an early score by Hannah Brattain with 32 minutes left in the first.

The match was a physical one, with players on both sides not wanting to give up position easily.

However after the Tiger Cubs were able to sneak one past the goalie again, thanks to Grace Gillen the Tiger Cubs found themselves two up with a lot of soccer left to play.

When asked about team chemistry Sydney Secrest said it all comes together through the joy that the team finds in the game.

"It's great," the senior said. "We have a great time in practice. We work hard and we always have to have fun because if it isn't fun it isn't worth it.

While it won't show up on the stats sheet players like Victoria Sampson, Katie Kessler and Sydney Secrest among others were using their physical play to keep the ball out of harm's way for the Tiger Cubs. They went into halftime with the lead 2-0.

The physical play continued as the Golden Arrows were determined to keep the game competitive, which was a feat, considering the constant pressure the Tiger Cubs put on the visitor.

When Sullivan did get a look at the goal Amelia Smith would thwart the attempt. She had seven saves in the contest.

Sullivan was able to get a score shortly after halftime but the Tiger Cubs were relentless and Gillen again was able to put one into the net, making the score 3-1.

"They are showing that they have drive," Weeks said. "They see that they are capable of a lot this season. They're able to support each other and not be afraid to take those risks. For lots of them to be taking shots on goal it's a booster for them. I cant to see them continue to do that later next week."

Sullivan never stood a chance after that, because Greencastle just fired shot after shot at the Sullivan goal.

The Sullivan goalie Ashton South actually needed 18 saves just to keep her team in it. Greencastle took 24 shots at the goal to Sullivan's six.

"We just had to work together," Secrest said. "We really connected our passes. We had great give-and-goes. We just connected really well and got around them.

They play next today at Monrovia. It is the first of five games before sectional play.