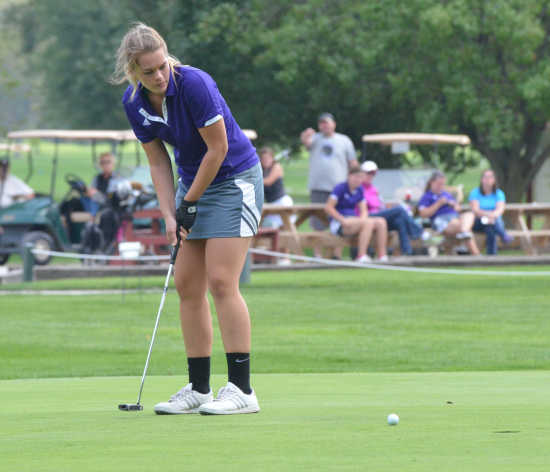 Lauren Bridgewater will be traveling to regional to compete with the best golfers in the area. (Banner Graphic/TRENT SCOTT)
Order this photo

Bridgewater advanced to the Smock regional as an individual without a team after shooting a round of 89 and will be joined by Rockville's Alexia Leer and Northview's Keirsten Mikesell, both of whom also shot 89.

Bridgewater said she was pumped to be able to advance like several other Greencastle golfers have done in recent years.

"It's pretty exciting," Bridgewater said. "I've watched the boys like Luke (Brotherton) and Alec (Davis) do it so it's exciting to go.

"I felt like I played pretty well. There were a few putts I should have had and I did hit a shot out-of-bounds, which didn't help, but I still shot 89 to move on."

Terre Haute North won the sectional with a team score of 342 while Megan Ramer claimed medalist honors for the Patriots with a round of 75. Terre Haute South and South Vermillion finished second and third to advance to the regional.

Greencastle finished fifth with a round of 403, four strokes better than Cloverdale's 407. South Putnam finished eighth with a team score of 499.

Lokysa Scheuermann finished the day with a 95 for the Tiger Cubs, followed by Macy Masten with a 108, Alex Weliever with a 111 and Haley Cash with a 117.

Tiger Cub coach Bob Hedge said the day was a success, even if only one member of the team advanced.

"I am really, really happy for Lauren, who's worked very hard this year," Hedge said. "I thought Lokysa played very well to shoot 95.

"Haley Cash had her career-low on the front nine with a 52. Alex shot well and while we wanted to break 400 today, I'm not unhappy with the way they played."

Harlee Fuetter, who qualified for the regional last year, missed out with a round of 93. Anna Spencer capped her Clover career with a round of 99, followed by Abbie Speas on 102, Abby Walker's 113 and Hannah Nichols' 115.

Cloverdale coach Matthew Langdon was impressed by the play of the girls and said that the only disappointment would come from not getting a golfer to the regional again.

"Team wise, we could not have asked for a better day," Langdon said. "Our team score went down from 435 at Deer Creek to a 407 today so the girls came out and played well.

"As a team, we knew this might be our last meet so we wanted to come out and finish strong. We're a little disappointed not to advance anyone as we had (Fuetter) move on last year but I think the way we played today trumps that.

"Harlee will be disappointed to miss out after having qualified last year," Langdon added. "She didn't have a bad round but we're seeing this year that the scores are much better than last year.

"She shot the same score last year and got out. All across the board, team scores and individual scores were lower than they were the last couple of years."

Alicia Haywood led the Eagles with a round of 103, followed by Carlee Schlatter's 112, Israel Polster's 134 and Kristi Wood's 150.

South Putnam coach Kevin Metz said the girls improved vastly from their WCC round at Deer Creek and ended the season on a positive note.

"The best part about today was that every girl improved their score from conference to today and I'm proud of that," Metz said. "Each girls shot their season-low over 18 holes today.

"Carlee improved by seven strokes from last week while Kristi dropped 18 strokes and Israel improved by nearly 30 strokes. Alicia played well again and they all did extremely well."

While the season ended Saturday for Cloverdale and South Putnam, Langdon and Metz were both buoyed by the way the year ended.

"We had a young team this year with our only senior Anna Spencer, who we're going to miss very much," Langdon said. "She's meant a lot to this program and has been a big contributor to the golf and building up the program by getting girls interested and involved.

"We're still behind some of the competition around here so we've got to catch up. What's great is that we're not having to push the girls to get out there because they're already talking about playing here or at Deer Creek and talking about the steps we need to take to play with these bigger schools.

"Playing well at the end means the girls are excited and ready for the next time they can play," Langdon added. "They're not just hanging up their clubs until next year and that's a big key."

"We started off the season a little slow but everyone improved as the season went on," Metz said. "Everyone was growing as a player and they were getting a feel for it towards the end of the season so hopefully we can continue where we left off and keep on improving our skills.

"Carlee is a great girl and she was always fun to have at practice. She worked hard every day and I wish her the best next year as we'll miss having her on the team."

With Greencastle taking the WCC and Putnam County titles, as well as having an individual advance to the regional, Hedge said that the season was a successful one.

"I'm pretty happy with this season," Hedge said. "We were 11-7 in dual matches and some of those losses were to Terre Haute North, Terre Haute South and Northview, teams that are going on to regional.

"We were able to win the WCC again and barely got the county and now have Lauren advancing. It would have been nice to get the team or Lokysa through but we'll take what we've gotten."

Preparations for the regional at Smock will be the next challenge for Bridgewater and the senior said that tweaking some swings would help for next week.

"I need to make sure and know the (Smock) greens well," Bridgewater said. "I need to figure out my shots and make sure they're all going straight again."

Hedge said that the main goal for next week was to make sure and appreciate the opportunity to play another week in the tournament.

"We'll do a practice round one day this week where we'll play 18," Hedge said. "We'll practice the short game a lot this week.

"She got in a little bit of trouble off the tee today so we'll fine-tune a few things but our main goal is to go there, have fun and enjoy the experience."

Individuals Advancing Without a Team

Next Match: Lauren Bridgewater will compete in the IHSAA Roncalli Regional held at Smock Golf Course next Saturday at 8 a.m.