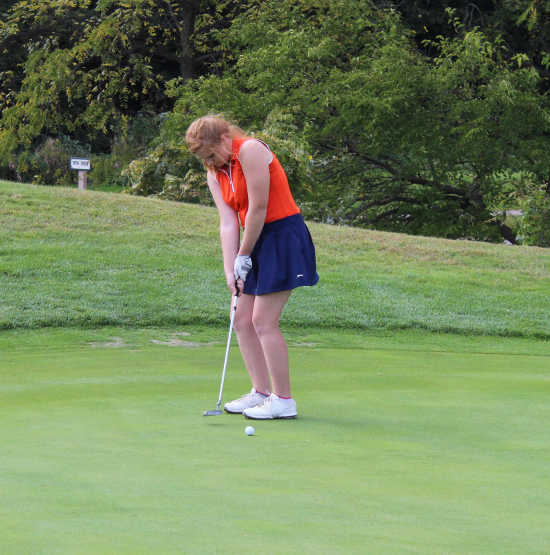 With only two Cougar golfers finished, storms came in around 7:30 p.m. and forced the meet to end. Most golfers still had at least two holes left to complete, but the decision was made to end the meet and take the results from the finished golfers.

Although this does not seem fair to unfinished golfers, Brownsburg, Plainfield and Avon will be moving on to regionals. They had enough scores to be placed. 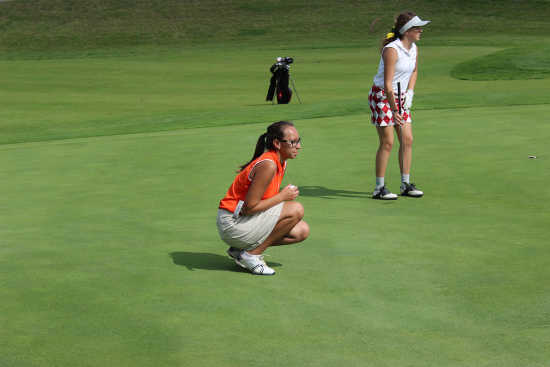 Senior Olivia Zarate judges the putt before making it at Brownsburg.(Banner Graphic/JOHNATHON GOODE)

North Putnam finished ninth out of 10 teams with only the two scores.

Seniors Olivia Zarate and Jessie Cox were the only two who finished on the Cougar squad. Zarate finished with a 104 and Cox a 108.

"These scores were very good for both of them," Cougar coach Linda Patrick said. "I think they did really well for their last sectional. "

Cox finished out her career as a Cougar on a high note. On hole 5, which is a par 3, she nearly had a hole in one. She barely hit the ball too hard, but she made the next shot to birdie on her final hole.

"I was really excited," Patrick said. "I really thought she was going to get a hole in one instead, but it went past the hole. When she birdied I was really happy for her. I was happy with her score this year with a 108."

Emily Harrington, Taylor Dixon and Emmy Eltz recorded no scores for North Putnam because of the weather and the decision not to continue on.

"From what I saw they were kind of up and down," Patrick said. "They get a high score then they turned around and might get a five or a six."

Eltz and Dixon are only freshmen and Harrington is a junior, so they will all see more playing time ahead of them.

"I hope this makes them think they can come out here and do very well," Patrick said. "This is a new course. We saw a lot of sand, a lot of rolling greens and a lot of other things we don't have at our place. Once they get this under their belt, they'll know they can come back and do it again. We did it once now we'll go back and do it better.