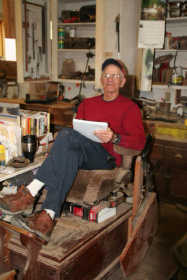 He was employed at IBM in Greencastle until 1971 when he started Branneman Construction, spending his career building custom homes. After retirement, he used his talents to create handcrafted wooden pieces too various to mention.

In addition to his parents, he was preceded in death by his brother Edwin R. Branneman and nephew Jordan Delp.

Visitation is Friday Sept. 26, 2014 from 4-8 p.m. at Whitaker Funeral Home, Cloverdale. Services will be private.