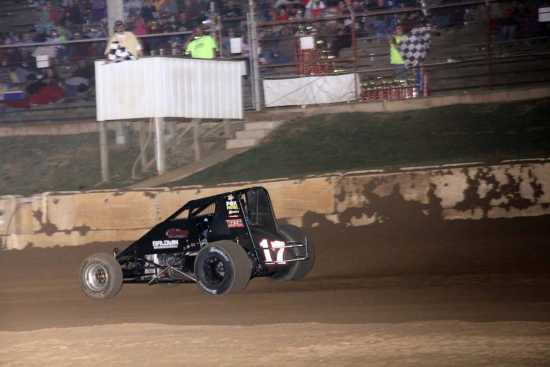 PUTNAMVILLE -- Lincoln Park Speedway wrapped up its 2014 season with a super size program full of firsts.

Putnamville's Kevin Kemp has 20 years of racing on his resume, but Saturday night he was able to add his very first feature win, claiming the first bomber make-up feature of the evening. Josh Presley took a bit of a cue in the next race of the night as he won his first feature at Lincoln Park Speedway as well. Not to be outdone, teenage sprint car driver Max McGhee celebrated a big week by claiming his first career victory by edging out Chris Phillips. McGhee also happened to pick up his driver's license earlier in the week and capped it in victory lane.

There was plenty of racing for fans, who got their money's worth as a total of nine features were run, including five make-up features from the previous week's rain out. 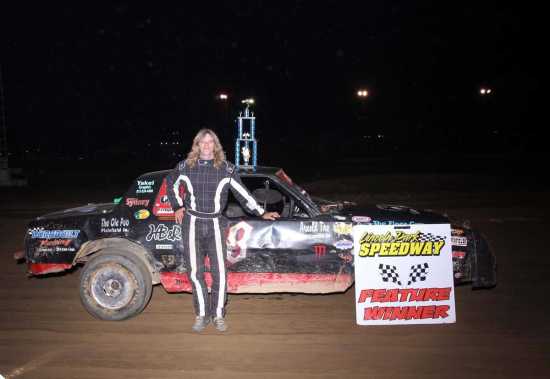 Putnamville's Kevin Kemp has been racing for 20 years and finally got his first career feature win as he got past John Grenie to pick up the victory. (Banner Graphic/JAY LOCKETT)

Jeff Bland Jr. started on the front row of the sprint car feature and finished in the top spot as well after working through traffic while holding off Brent Beauchamp, who was on his tail tank. AJ Hopkins was right there in the fray as well for most of the A-main and would eventually come home in the third position ahead of Ethan Barrow and Kent Christian.

In the regular sprint car feature of the night, Chris Phillips and Bradley Sterrett started on the front row ahead of Beauchamp and Bland.

Once the green flag waved however, it was Beauchamp and Bland out front along with Phillips and Hopkins. Ten laps into the 25-lap feature, Beauchamp and Bland were side-by-side with Christian just behind them. Meanwhile, McGhee, starting 19th in the field, was slowly picking off cars on a charge to the front.

Bland took the lead rocketing into turn four, but Hopkins stole it away moments later with Beauchamp in tow. Hopkins came out ahead of the pack and opened up some space as lapped traffic approached. Looking for another 2014 victory, Hopkins luck turned sour as he got tangled up with one of the back markers and spun. He wasn't alone however, as Bland was collected and Beauchamp was forced to the work area in the pit area.

With the top-three suddenly in the pits, Phillips was left out front ahead of McGhee, Chris Gurley and Lee Underwood with five laps remaining.

When the field took the green, McGhee wasted no time in finding his way to the point and from there, he made it academic in picking up his first victory of his young career. Phillips held down second ahead of Gurley, Brazil's Eric Burns and Barrow.

The UMP Modified features had a pair of familiar victors as Illinois' Randy Shuman found victory lane once again in the make-up feature. Running in the top-five were Jeff Deckard placing ahead of Dan Lewellen, Wes McClara and Kenny Carmichael Sr. In the nightcap, Derek Groomer recorded his ninth feature win of the season, denying Shuman another win on the evening. Jason Clark placed third ahead of Gary Hayden and Lewellen.

In the super stock class, Doug McCullough added the cherry on top of his points championship at LPS vy winning the make-up feature after leader Steve Peeden spun late in some liquid dropped by another competitor. McCullough took advantage of the opportunity to record his third feature win of the year as Carmichael Sr. came home second ahead of Scott Carrington, Peeden and Mark Smith.

In the regular feature, Ralph Groomer was the winner as he got around Travis Howe on the topside and came home with the victory as Carmichael was third ahead of McCullough and Carrington.

Kemp's first victory in the bomber class certainly didn't come easily as John Grenier led the entirety of the race until the final couple of circuits. Ron Smith was the first challenger to the leader, but spun while attempting the pass in turn four. That opened the door for third-place running Kemp.

On the restart, Kemp blasted through the corner and went to the high side and made his fateful pass stick and claimed the win as Smith came back to take second ahead of A.J. Smith, Jack Campbell and Mark Dickerson. In the second bomber make-up feature, Presley battled door-to-door with Eric Miller before picking up the win as Rookie of the Year Chucky Walden raced to third-place ahead of Kyle Krupa and Joey Cox.

Fittingly, the final event of the season was a 30-car bomber feature that was won by A.J. Smith, who got by C.J. Bryan off a late restart to claim his first win of the season as Miller finished a strong night with a third-place followed by Dave Kikendall Jr. and Presley.