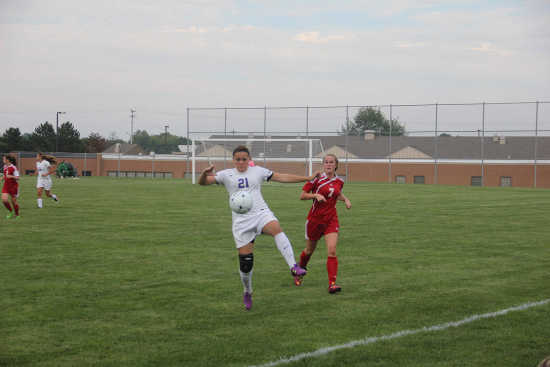 Breana Ferrand tries to control the ball near the sideline for Greencastle. (Banner Graphic/JAY LOCKETT)

Soon to follow another strong assist by Bailey Lausee gave a clean shot by Breanna Ferrand. Continued possession and break aways allowed a third goal to land into the net by Whitney Weinschenk. At the half the score was 3-0.

The second half continued to unfold with a shot in by Brown County but the Lady Tiger Cubs pressed on to rally one more goal into the opponent's net.

The final goal was assisted by Lauren Harris to Gracie Smith. The 4-1 win ends the streak of away games for the season.

The final game will be held Oct 2 against North Putnam at home. This will be senior night to celebrate a fantastic season for Greencastle's two seniors.

Sydney Secrest and Breanna Ferrand will showcase their skills during the last regular season game before the team heads into sectional play the following week.