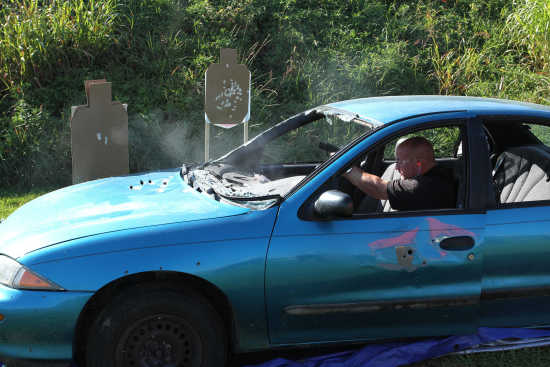 With the rise in shootings against law enforcement, Putnam County police personnel recently participated in a cover-and-conceal class at the Capt. Jim Baugh Firearms Range.

With members from the Greencastle Police Department, Putnam County Sheriff's Department, DePauw University Police Department and the Indiana State Excise Police taking part, instructors Jerrod Baugh, Greencastle Police Chief Tom Sutherlin and Officer Darrell Bunten demonstrated to officers just how effective vehicles can be when used as cover in an active shooter situation. Not only shooting through the vehicle, but shooting from the inside out.

"Vehicles can be both cover and concealment," Baugh explained. " In other words, they can stop bullets in some areas and in other areas they don't stop bullets very well. You see that when you actually watch the bullets and how they go through and where they go through. It gives us a better idea on how to protect ourselves as police officers."

Greencastle Police Department Capt. Chris Jones practices shooting from behind a vehicle during cover and conceal training on Thursday. (Photo by LAUREN BOUCHER)
Order this photo

The goal of cover and conceal training, which is done every couple of years, is to properly get rounds down range and on target, and although the training itself is more information based than anything, it helps when officers are able to experience such situations.

With the first part of the four-hour training session being information based, officers then had the opportunity to participate in skills training, during which they were able to apply the information they just received by not only sitting in the driver's seat firing through the vehicle itself, which was donated by Seniours Auto Salvage, but also participating in target skills training.

"Once you see it, it sticks in your mind better than anything you can read in a book," Baugh added. "It also tells the officers when you shoot through the glass that we don't have to overthink it. We just have to go into our standard survival mode."

Although several of the officers had been through such training before, this week's session also built upon prior training by incorporating tourniquet training as well.

"We added tourniquet into it to build on top of that from last year," Baugh explained. "Tourniquet training in drills adds stress to the course and we have many documented cases of these life-saving skills being used at shooting scenes."

The value in the training is what the officer leaves the range with what they did not have when they arrived. For many, it may just be a refresher or for some it may be an entirely new experience.

"After this training the officer can be more confident in their abilities to save their life and others," Baugh noted. "There are few things like shooting from inside of a car to a threat on the outside. In stressful situations, officers will likely rise to the occasion, they will simply fall back on their training."