As originally planned, the outdoor portion of Greencastle's new monthly First Friday venture was supposed to end in October. 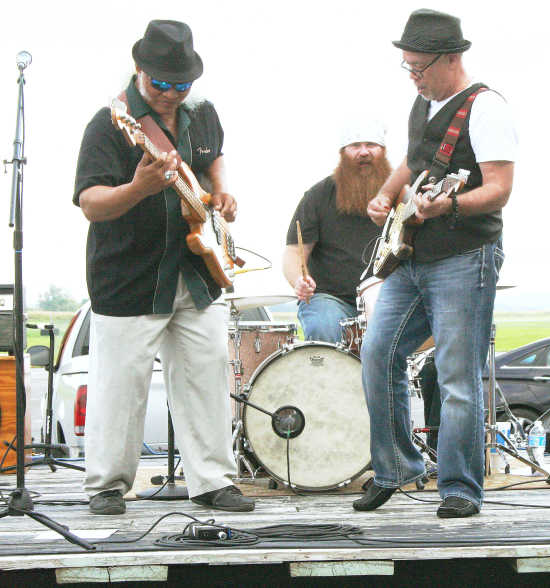 So that would seem to make this Friday, Oct. 3, the last in the series of outdoor events until next May. The plan was that the momentum would then allow First Friday to continue within the businesses downtown, even during the cold months.

But now, as October looms, organizers are rethinking that and could opt to continue the outside venue on Nov. 7, weather permitting.

Meanwhile, activities for this Friday, Oct. 3, are growing with music and food to be augmented by pink activities related to Breast Cancer Awareness Month (October), guest speaker Susan Crosby (former District 44 state representative and current president of Women in Government) of Roachdale, Dance Workshop performances and demonstrations that will include "Get Your Pink On" and the Apostrophe' Art Space on the road pop-up show.

As usual, First Friday is scheduled for 6-9 p.m. on the courthouse square with most of the music and food occurring on the north side of the courthouse.

Blues Side Up, anchored by local musicians Steve St. Pierre and Jonathan January, will perform at 7:30 p.m. on the outdoor stage.

Along with the regular food and drinks available from Almost Home, some of the other events and booths will include:

-- A Main Street Greencastle balloon lift-off just before dark. Main Street will be selling pink balloons during the evening.

-- Dance Workshop's eighth annual "Get Your Pink On" event that will include Crosby and fitness demonstrations of Zumba, PiYo, Turbo Kick and more.

-- Gourmet cookies and candies from Sweet Wishes by Eitel's and Co. Florists.

-- Game Warehouse, 5 percent off purchase(not combined with any other offers) hosting a "Magic the Gathering" card game event.

-- The possibility of a visit by Wabash Valley's Komen pink fire truck.

The acoustical music scheduled there is sponorsed by 9 East on Poplar (also renovated by the Shinns) and the newly formed non-profit Greencastle Arts Council.

Two artists -- Bob Sorrels and Brittney Way -- will be featuring their work, while local musicians LaTosha and Joel Everson (Him and Her and War Radio) and Anthony Mullis (aka Gus Moon) and Dennis Furr (War Radio) will perform two separate acoustical sets Friday evening at The Carriage House.

Sorrels, a visual artist, has a studio located in Parke County. His work ranges from fine furniture and home furnishings to sculpture, to Finnish soapstone fireplaces.

In the upcoming exhibit, "Sticks and Stones" he is exploring the relationship between sculpture and poetry in a modern interpretation of Haiga, a Japanese art form. Haiga is the marriage of a visual image with the images of a haiku poem in such a way that the whole is greater than the sum of its parts.

Meanwhile, Way will be exhibiting her "Awaken Imagery" collection. As a photographer who developed a passion for art at an early age, she took notice of the simple beauty surrounding her in nature. Her inspiration is drawn from the raw beauty she finds in the world, in nature, and in people.

Way, a 2005 South Putnam High School graduate attended IUPUI and Ivy Tech, where she studied photojournalism and visual communications. She has traveled the country to gather a majority of her inspired images and currently resides in her hometown of Greencastle.

As for the music Friday evening at The Carriage House, Him and Her will perform 7-8 p.m. Their new album is called "Tracks" and they also will be playing the First Friday event at the Swizzle Stick from 9 p.m. to midnight.

Mullis and Furr will play 6-7 p.m. Friday at The Carriage House.

Mullis, aka Gus Moon, is a singer-songwriter whose style is best described as folk-driven, rock n' soul. As Gus Moon, he has been entertaining Hoosiers for seven years and in 2013 released an E.P. titled "Splendid Noise" which followed the 2012 full-length release "Worn Out Shoes."

His long-time music partner, Dennis Furr, plays bass guitar, keys and drums. Furr, who plays in a number of bands, including War Radio, released an album in 2014.

Mullis and Furr, along with Dennis' brother Glen, have been developing a new project they named "Trollkiller" and will be releasing its debut album this