BY TRENT SCOTT For the Banner Graphic 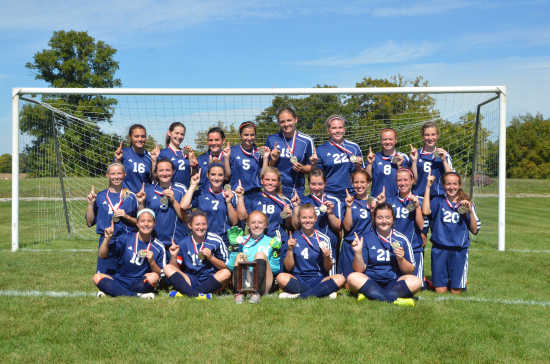 NEW MARKET --With the final, and perhaps most important, two-game stretch of the season coming up in the next week, North Putnam's girls' soccer team took part in the Southmont Invitational Saturday morning.

The Cougars could not separate themselves from either Southmont or Western Boone in normal time but claimed victories over both, and the invitational title, with a pair of 4-2 penalty shoot-outs.

North Putnam coach Chase Hiland said that winning the title, especially after getting past the Stars, was a momentum booster for the team. 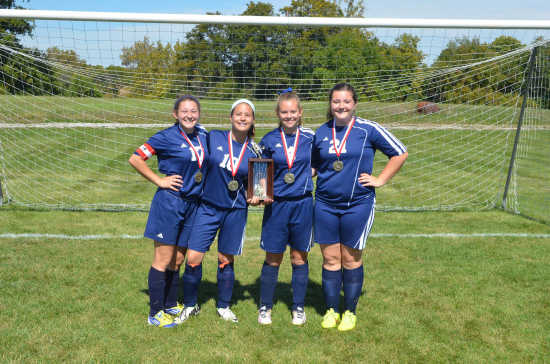 "Western Boone has been a bugaboo for us for a long time," Hiland noted. "The girls have been frustrated and they really wanted to beat them and the last game was a great example of that.

The Cougars had already faced both schools earlier in the season, picking up a 3-1 win over Southmont and losing earlier in the week 3-2 to Western Boone.

Facing the hosts in the opener, North Putnam fired in 12 shots and a penalty but could not breach a stubborn Mountie defense as the match finished 0-0.

Goalkeeper Claire Sims watched the first Southmont penalty sky over the goal and made a save later in the round while teammates Laurel MacGregor, Emilee Henninger, Christa McRoy and Kaelynn Abner buried their spot kicks to advance to the championship game.

The Cougar defense provided a good showing, though Hiland felt the squad could have gotten the win in regulation.

"It was, as the score showed, pretty defensive," Hiland said. "Both of the teams we played today are fast, direct teams and we knew coming in that they would use their athleticism and their speed to their advantage.

"Southmont is a flank-oriented team which we wanted to neutralize as much as possible. We had some opportunities to score and if we convert one of those, we could win that match.

"It went down to penalty kicks, which I think was a fair result for both teams," Hiland added. "Our girls stepped up and hit perfect penalties to the sides.

"It was a good defensive effort but penalty kicks are always a heart-stopper."

In the championship match, Western Boone had the better chances to start the final and could have taken the lead as early as 12 minutes in when Meg Kinslow hit Sims' right-hand post.

A minute later, Audrey Dugan gave the Stars the lead their early play deserved, hitting a 20-yard lob over Sims' head and into the top corner.

Hiland said the squad needed the opener to get into the game.

"Sometimes we settle in and I wish we would get over that," Hiland said. "It took their goal for us to wake up and I could tell we were more aware after it.

"We were a little slow, almost sleep-walking, and we were jolted by a great goal. The girls responded well and we got a goal from Christa."

North Putnam's response was swift and three minutes later the scores were level.

Abner dribbled down the right side of the Star defense and squared to McRoy. McRoy's initial shot was blocked but she was the first to react and stabbed a shot past keeper Erika Timmons to tie the score.

The teams went into the half with the score 1-1 but did not stay that way for long when Kinslow's lob at Sims was ruled a goal three minutes into the second half.

Sims clearly disagreed, as did the North Putnam fans, though Hiland said he was not sure whether the ball had crossed from over half the field away.

"I couldn't tell and Claire was adamant that it hadn't crossed," Hiland said. "I believe her as she's an honest person.

"Those goals happen sometimes and we did a good job right from that point of responding by pushing the envelope. Our second goal came from sustained pressure."

The Stars nearly doubled their advantage a minute later when Pate Thomerson was denied by Sims while MacGregor hit a cross-shot at the other end that Timmons was forced to palm away.

North Putnam leveled the scores again just after the 10-minute mark when MacGregor swung a corner into the Western Boone box and Abby Ohab headed into her own net.

Hiland said the ball MacGregor delivered from the corner was worthy of a goal.

"Laurel put in a great ball and when you do that, you make the defense have to win the ball," Hiland said. "Sometimes you get an own goal, not from luck, but because the defender had to win it and, unfortunately for them, it went into their net."

Camryn Savage had the best chance to win the match in regulation but skied her shot well over Sims' goal halfway through the second period.

Western Boone put the Cougars under intense pressure over the next 10 minutes but failed to get a shot of note off while North Putnam finished the final minutes stronger as Abner had a shot sail wide in the final minute.

Penalties were required to separate the finalists and, much like the first time around, MacGregor, Henninger, McRoy and Abner buried their spot kicks.

The spotlight, though, was on Sims. The Cougar junior got down extremely well to turn Julia Hole's opening penalty around the right-hand post and saved Timmons' chipped effort on the line to turn the Stars away and give North Putnam the Southmont Invitational title.

Having already gone through penalties once that day, Hiland said the squad approached the second set of spot kicks with an air of confidence.

"Because they had already done it once, they felt a little more at ease," Hiland said. "They weren't as tense and their breathing was not as heavy.

"The first time, there were a lot of sighs and nerves. They were ready for the second one and were a lot more confident.

"Claire's always been good in goal," Hiland pointed out. "That first save she made was a great save, getting a touch on a shot low and to the side."

The win also ensured that North Putnam seniors Samantha Freije, Jessica Schubert, Megan Plessinger and Kaylee Henninger would leave with a tournament title as well as a victory over the Stars, whom the Cougars had failed to beat in five tries over the last four years.

Hiland said that he was pleased that the group would be able to lay claim to a trophy after their hard work over four years.

"These girls have responded well to me, being a first-year coach," Hiland said. "They're all reliable defenders that I can plug into the back four and they'll do a job to the best of their abilities.

"I've been fortunate to start with a really good senior class and a very good group of players. It's really good to win something for them and for them to have some hardware and patches.

"They can look back on that and remember when they won that invitational," Hiland added. "I'm proud of what they've given us.

"They've wanted to win something like this and hopefully this is a favorite memory for them from their senior year."

North Putnam turns their attention to the final two matches of the season, a pair of WCC clashes as the Cougars travel to Cascade Tuesday and Greencastle Thursday.

Hiland wanted the squad to keep pressing forward and said the squad felt the same way.

"We've just got to keep playing our game and improving on the things we've been working on all season," Hiland said. "We have two good teams coming up in Cascade and Greencastle.

"Cascade has talented girls and the match with Greencastle is always a tough, cagy match. The girls know each other and play with them on travel teams.

"This is a momentum boost and I know they're ready to play the conference teams."