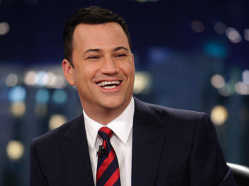 Jimmy Kimmel, host and executive producer of the Emmy Award-winning "Jimmy Kimmel Live!", the longest running late-night talk show in ABC's history, is coming to DePauw University on Saturday, Nov. 8. Presented by the Timothy and Sharon Ubben Lecture Series, "An Evening with Jimmy Kimmel" will take place during ArtsFest, DePauw's annual week-long celebration of the arts, which has a 2014 theme of "Art & Laughter."

The program, which begins at 7:30 p.m. in Kresge Auditorium, located within DePauw's Green Center for the Performing Arts (605 S. College Avenue), is free. No tickets will be distributed. Details on when doors will open, etc., will be announced before the event.

Kimmel will engage in a conversation with Tom Chiarella, Hampton and Esther Boswell Distinguished University Professor of Creative Writing at DePauw, and then take questions from the audience.

Chiarella, a "writer-at-large" for Esquire, produced a story on Kimmel which was featured on the magazine's April 2014 cover.

"It is the friendship that Tom and Mr. Kimmel developed during the making of that piece that has led to this event," said Ken Owen '82, executive director of media relations for DePauw and coordinator of the Ubben Lecture Series. "We thank Tom for setting the wheels in motion, and Jimmy's team for making this rather crazy idea a reality. I know the DePauw community -- our students in particular -- will be excited to hear this news and am quite certain that Nov. 8's Ubben Lecture will be a day that is talked about for many years to come."

Kimmel hosted the Primetime Emmy Awards in 2012 as well as that year's White House Correspondents' Association Dinner in Washington, D.C. In January 2013, he was honored with a star on the Hollywood Walk of Fame.

After 12 years in morning radio, Kimmel got his start in television as co-host of Win Ben Stein's Money on Comedy Central, for which he won an Emmy for Best Game Show Host in 1999. Kimmel co-hosted, co-created and executive produced 100 episodes of The Man Show for Comedy Central. He served for four seasons as on-air prognosticator for Fox NFL Sunday; co-created, executive-produced, and co-starred in Crank Yankers for Comedy Central/MTV, and co-created and executive-produced The Andy Milonakis Show for MTV and MTV2.

In Esquire, Professor Chiarella wrote, "He's not Conan, not Fallon or Letterman. He's not good at silly. He doesn't sing. He isn't confused about his purpose. He doesn't blather on about current events. It's how he got here and why he's staying: He pranks the world and makes us like him for it."

New York Times columnist David Brooks presented the first Ubben Lecture of the 2014-15 academic year Saturday night, and Piper Kerman, author of the bestseller "Orange Is the New Black," will come to campus on Feb. 4, 2015.