Purdue Club to host speech by board chairman Oct. 23 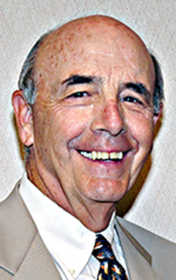 Thomas E. Spurgeon, chairman of the board of trustees of Purdue University, will be the featured speaker at a dinner program sponsored by the Purdue Club of Putnam County on Thursday, Oct. 23.

Spurgeon is an entrepreneur who built companies throughout the United States and most recently served as president and CEO of Lincoln Office in Peoria, Ill., one of the country's largest distributors of Steelcase furniture. He is now a consultant to the company, which he sold in 2001.

His entrepreneurial interest was developed while serving with Cummins Engine Co. His last position with Cummins was general manager, sales and service, North America. These experiences led to consecutive ownership and management of three companies -- Gott Corporation, COSCO and Lincoln Office.

During his business career, Spurgeon has also been active in supporting Purdue University through alumni activities and his generosity has resulted in three campus facilities bearing his name -- the Tom Spurgeon Golf Training Center, the Spurgeon Hall of Spirit in the Dauch Alumni Center, and the Spurgeon Club at Mackey Arena.

Spurgeon's service on the Purdue Board of Trustees began in 2005 when he was elected by the Purdue Alumni Association as one of three alumni trustees. He was elected chairman of the board of trustees in 2013.

Ron Birt, president of the local Purdue Club, invites the public to attend and hear about current Purdue activities.

"This is an excellent opportunity to get an inside view of the decision-making process in the governing of Purdue," Birt said.