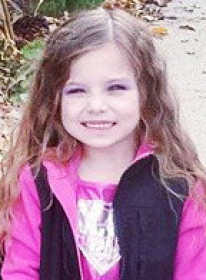 HILTON HEAD, S.C. -- A seven-year-old Greencastle girl survived a shark attack on fall break this week but suffered a foot injury that required 50 stitches to close.

Kyra Bandy, a Ridpath Primary School second-grader visiting South Carolina with her family, was reportedly swimming 10 feet from the shore at Driessen Beach on Hilton Head Island when the attack occurred Tuesday.

The shark -- possibly a three- or four-foot bull shark, according to doctors who treated the bite -- latched onto the girl's left foot and pulled her under the water.

Reports indicated she needed surgery to repair a tendon and nerve in her foot.

The girl's mother, Sentra Weddell Bandy, said the shark didn't let go until Bandy's father Brian pulled her out of the water.

In a Facebook post Thursday, she said her husband "saved our daughter's foot and possibly her life."

The bite wound in Kyra's big toe area was of the most concern with it described as "really deep" by Bandy's online post from Hilton Head Hospital.

She added that, according to the plastic surgeon, her daughter is doing well but certainly has a "long road ahead" of her.

"Please keep the prayers coming that she heals 100 percent," she added.