Fleming and Mangrum compete at semi-state 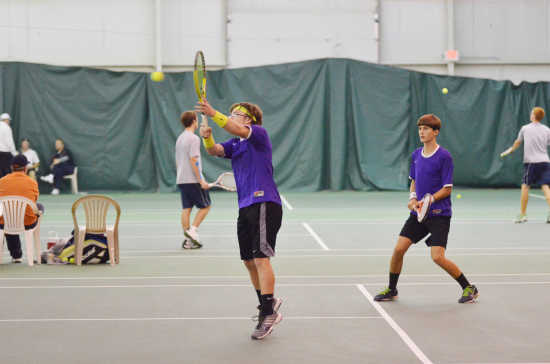 GHS No. 1 doubles team of Kaleb Fleming and Jake Mangrum took its talents to Kokomo for the regional matchup on Saturday. (Banner Graphic/TRENT SCOTT)

KOKOMO -- Having waited over a week and a half to resume play in the IHSAA Individual Boys' Tennis tournament, Greencastle seniors Kaleb Fleming and Jake Mangrum finally got the chance to play for a spot in the state finals at the Kokomo Regional Saturday morning and afternoon.

The Tiger Cub pairing fell just short of going where no Greencastle team had gone before, falling to Pendleton Heights' Sam McKinney and Mitchell Staley in the final after knocking off Brandon Burch and Alex Hunter of Norwell earlier in the day.

Before Fleming and Mangrum were able to start the day, rain moved the match from the original hosting site, Kokomo High School, to the Howard County Indoor Tennis Center in neighboring Greentown.

Greencastle coach Kevin Rowe said the win in the first set was about mentally hanging tough.

"The first match was definitely a testament to their will to keep fighting," Rowe said. "They got very upset with themselves but they fought through that and helped each other out.

"They pumped each other up and were able to overcome adversity. I thought they played great."

Playing three sets at a high level was taxing and Rowe said that both teams used the nearly two-week layoff to their advantage.

"Not only did we have a lot of time off, Norwell did not make it out of sectional play, so they had even more time off," Rowe noted. "It was good to have fresh legs because this three-set match was very trying on both teams."

The Tiger Cub doubles outfit started off very slowly, winning the first set but losing the next four sets to Burch and Hunter.

Instead of allowing the set to pass by, Fleming and Mangrum rallied furiously to force a tiebreaker game, coasting with a 7-3 win to take the first set.

Rowe said the work and the credit belonged to the senior pair.

"We won the first game but then lost the next four and we had to fight very, very hard to get back into it," Rowe said. "All the congratulations go to Jake and Kaleb.

"When they get things going, they're a tough team to beat. They're great players and I was pleased with how they played."

The Tiger Cub pair had two chances to end the match in the second set but dropped games at 5-4 and 6-5 to set up a second tiebreaker game.

Burch and Hunter carried the tiebreak game in much the same way Fleming and Mangrum had done in the first set, squaring the match and forcing a third set.

Frustrations threatened to boil over during the loss but Rowe said the break between the sets helped the pair refocus.

"I could tell that if they were going to pull out the second set, it was going to be very difficult because they were frustrated with the way they were playing," Rowe said. "It was good for them to have a break between the second and third sets so I could talk to them and they could refocus."

After looking tired in the opening few games, Fleming and Mangrum ran through the Norwell pair by taking the final five games to win 6-2 and put themselves within one match of participating in the state finals.

During the second change over, Rowe told the twosome that the win or the loss was squarely on their shoulders.

"Norwell had a great team but I told them they didn't win those two sets; we gave it to them," Rowe stated. "When they did the things they normally do, they were fine.

With a chance at the state meet staring in the face, though, the finals match with McKinney and Staley of Pendleton Heights did not play out the way the Greencastle seniors envisioned the afternoon going.

The Arabian pair made quick work of the Tiger Cub duo, rallying during several points from disadvantageous positions to sweep the match 6-1, 6-1.

Afterwards, Fleming, Mangrum and Rowe each felt that the level of play in the final was well below par.

"It could have been better, but I think they've had a heck of a season," Rowe stated, with the sentiments echoed by both Fleming and Mangrum. "They did something that I don't think Greencastle has ever done before, which is great.

"If they had played like they did in the first set, they could have definitely given those guys a run for their money."

For their part, Fleming and Mangrum were pleased with their efforts this season.

"It was pretty cool to play in the regional," Fleming said. "We went farther than anyone's ever gone, so that's pretty cool."

"I think it was a great experience and even though we lost, I think those guys played their hearts out and they deserve their win," Mangrum added. "I'm just glad we got to enjoy it together."

Having begun as partners in earnest as juniors, the pair agreed that their play complemented one another and made their success this season possible.

"We have weaknesses but our flaws are complete opposites," Mangrum said. "We've had good chemistry with each other and bonded as a team."

"Our movements are almost synchronized on the court," Fleming added.

Rowe felt that their play was indicative of the entire Greencastle tennis team.

"Before, we were getting knocked out of the sectional in the first round every time. This year, the guys pulled out a sectional title, played hard at regional and Jake and Kaleb individually progressed tremendously.

"Hopefully, these guys hit with the guys that are playing next year to help us keep getting better," Rowe added. "We're going to lose a lot of good players but I'm hoping some of the younger guys learn from these guys and are up to the task next year."

The possibility of playing in the future is one that Mangrum has an interest in while Fleming is yet to decide on.

"I do plan on playing tennis in college," Mangrum said. "I am looking at smaller schools and then look to move to a larger school after two years."

"It's a possibility," Fleming added.

With their season completed, Mangrum said that the whole experience was one that all involved could be proud of.

"I think we had a great season," Mangrum said. "I couldn't single out one moment because the whole season has been a fun time in general."