Where the Road Runs Out 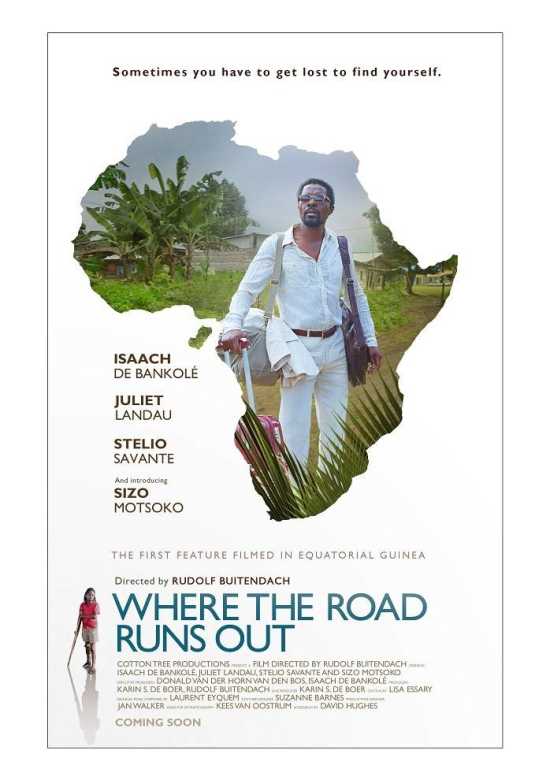 George Mensah (Issach De Bankole) is a man at a crossroads. He's a well known academic and lecturer, but something is missing. He's restless and struggling to find his way.

Things don't improve when he's informed that one of his friends, a fellow academic in Equatorial Guinea who he helped financially, has died. He and his friend Martin (Stelio Savante) hit the town, spend the night drinking and talking about their lives. During their conversation, George makes up his mind to head to Equatorial Guinea and check out the research station where his friend was working at as well as the local orphanage.

Upon his arrival, George doesn't find the workable field station he expected, but a ramshackle shack with slate boards for walls and holes in the roof. He quickly gets to fixing the station up and encounters a good-natured, spirited young boy named Jimi (Sizo Motsoko).

The two quickly form a bond and become inseparable. Jimi becomes sick after consuming a generous gift of chocolate from George which leads to George meeting Jimi's teacher Corina (Juliet Landau) and director of the local orphanage. Although their first meeting is rocky, the chemistry between the two is without question.

George continues to shed aspects of his old life such as drinking and making the decision to sell his apartment in Rotterdam and becomes more at home at the field station. George asks Corina about all the money that was sent to his friend and she shows him ledgers to prove the money was never received.

The two become romantic and all is going well until George's friend Martin shows up. Martin wants to get the party started, but George confronts him about the missing funds, with Martin admitting he never sent the funds, but used them for his own.

Following a birthday party at the orphanage, Jimi rushes to George's place to enlist his help to take girl from the orphanage to the hospital. While he's gone, and with Martin passed out drunk, Jimi inadvertently catches the field station on fire and it burns to the ground. The moment shows how far George has come as he laughs it off after learning that Jimi and Marin are fine.

"Where the Road Runs Out" is a solid film with good performances from Bankole and Motsoko and the supporting cast. The message of transformation and returning to ones roots to find their core self will resonate with many of the audience.