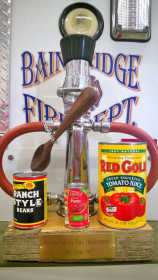 BAINBRIDGE -- One of the biggest fires in recent memory for the Bainbridge Volunteer Fire Department got some firefighters thinking about ways local fire departments can help each other out.

When Lifespring Church caught fire last January, 19 departments helped battle the blaze in some way. Bainbridge VFD Lt. Kevin Thorson began thinking that there may be more to "mutual aid" than simply showing up at one another's fires.

"I thought, why can't we do a mutual aid type of fundraiser," Thorson said.

With that in mind, Bainbridge has organized the inaugural Putnam County Fire Departments Chili Cook-Off, set to take place at the Bainbridge Fire Station on Saturday, Nov. 1.

Each department is allowed two entries -- one mild and one spicy.

Attendees will be asked to pay $5 each for chili and drinks, while kids 12 and younger are free. Admission will also include hot dogs and condiments.

The admission price will be split among the participating departments.

"The nice thing is, everybody's going to be walking away at least breaking even," Thorsen said.

However, the paying public will also be acting as judges of the chili. Besides admission, tickets can be purchased for $1 each.

The department receiving the most voting tickets will take first prize, which includes a monetary prize and a traveling trophy -- a fire nozzle, wooden spoon and cans of beans, tomato paste and tomato juice mounted on a wooden base.

Organizers hope the cook-off becomes an annual event, whether housed at Bainbridge or traveling around the county.