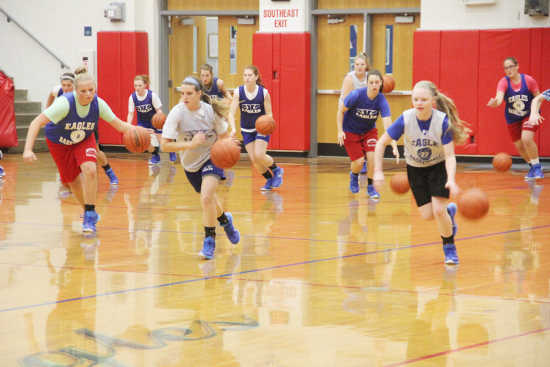 The only staple at South Putnam when it comes to girls' basketball has been the players who have played for the Eagle team over the last four years. First-year coach Tim Garver wants to build that chemistry into a winning season and a winning culture at South Putnam.

"The senior leadership of Ariel Higgins, Emily (Dobson) and Katelyn Lady are just a good group of girls," Garver said. "A lot (players) have been through five different coaches and have never had a winning season."

Garver said the coaching staff worked with the returning players to establish what kind of team that they wanted to be a part of. 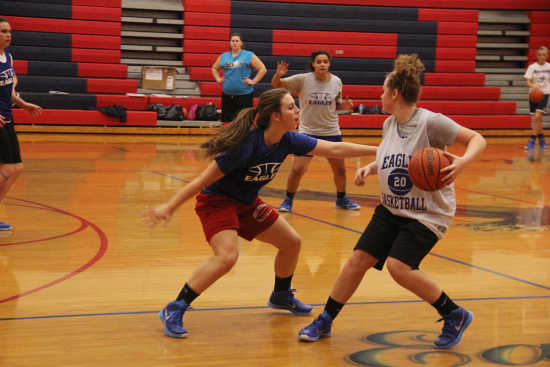 "A lot of what I've been trying to do with them has started way back in the summer," Garver said. "We talked with them and showed them videos of leadership and how to become leaders and how to become winners. Really they know what they've been through, so how are we going to turn this around and get this tradition started? They've accepted that role and they are willing to be the ones to set that expectation."

The players on the team have been working with Garver since the summer months and, among other things, it has brought a the team unity to a crowing point.

"We had a really awesome summer with coach Garver and it's made this program really dynamic," Dobson said. "We've added a lot of things. We added a youth league this summer that we hosted at South and it helped a lot. This summer definitely helped in adjusting to a new coach which has become kind of common. But it has been really good. We all love coach." 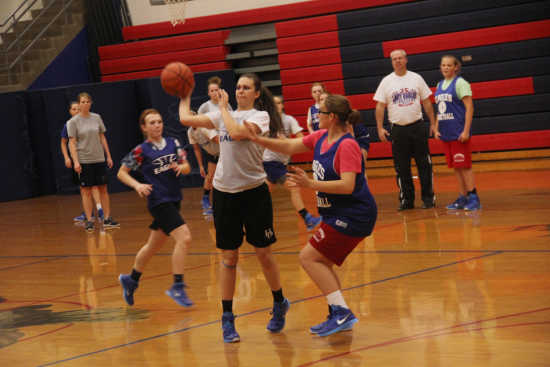 Emily Dobson surrounded by her Eagle teammates makes a pass out of traffic during a blue vs. white scrimmage on Tuesday. (Banner Graphic/JAY LOCKETT)
Order this photo

Dobson has been with the team through the revolving door of coaches and has been learning along with the other seniors how to best implement Garver's game plan.

"We have just been working really hard in practices to communicate and get our plays down," Dobson said. "We are figuring out who is going to work best in which positions and what plays we are going to start out with."

Now that the season is set to start, the Eagles are ready to cash in on the work and time that has been put in since the summer.

"Practices are going really well," Higgins said. "We are working a lot better as a team this year than we have in the past. I think that in the scrimmage we are just trying to get some team unity so that when progress we all progress together so we can win together."

"I think we all want it really bad so we are all putting in all of the effort he can."

"We started a sort of fundraiser league if you will," Garver said. "In that we've gotten the girls new shoes, and warm-ups. We've gotten them shooting shirts and a lot of things that they haven't had in the past. So there is a lot of energy there and a lot of excitement. The girls have bought into our system. They are buying into what we are doing and we are excited. They are excited to be here."

The excitement has spilled over to the parents and Garver says the enthusiastic help is appreciated.

"The parents have been terrific. This summer we had several parents host cookouts. It was a time for the parent to get to know me and not just me but the other coaches. We have a tremendous coaching staff."

In these early season stages, Garver says that the teams' strengths at this point are introverted but will help the Eagles win late in the season and in the future.

"A lot of our strengths are condition," Garver said. We've been conditioning realy hard. The girls are working extremely hard. We've had practices and early morning conditioning at six in the morning. The major excitement is our strength. Another thing is that we are young. We have three freshmen and we'll play and they'll play big roles. Miranda Bieghler, Lillie Stein and Maddie McHugh all three of those girls will contribute."

The introduction of the youth team is a way for the tradition of South Putnam girls basketball to become something more. Garver hopes that the large influx of players to the youth league reflect the community's interest in the success of Eagle basketball.

His hope is that the players in the youth leagues translate their interest into varsity sports and enter the world of South Putnam basketball with an idea of what is expected from coaches.

"With the seniors they have talked they want to win sectionals and they want to win conference," Garver said. "They want a winning season. That's just the culture that we want to change. I'm not sure that culture has been here. But we've talked about 'why not?' It starts now. So they've put the goals out there. They want to compete day in and day out. We talked to them all along. If you work hard and you do what's asked, everything else will take care of itself."