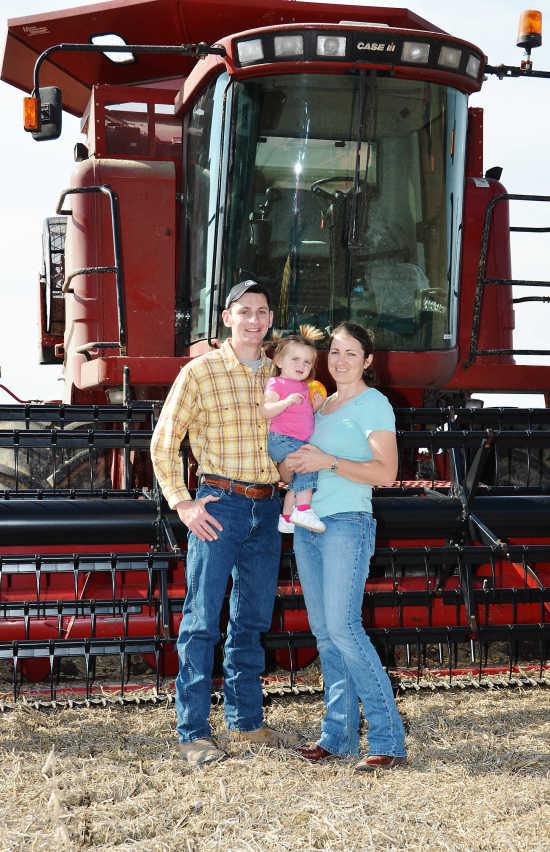 Nick and Beth Tharp -- along with Beth's parents Phyllis and Mark Legan -- care for 3,000 sows, wean nearly 77,000 pigs each year and farm more than 900 acres of corn, soybeans and hay east of Greencastle while also raising their one-year-old daughter Kate. (Courtesy Photo)

A Putnam County young farm couple is among the finalists named in Indiana Farm Bureau's Young Farmer Achievement and Excellence in Agriculture contests.

The winners will be announced at INFB's Dec. 12-13 convention in French Lick.

The Young Farmer Excellence in Agriculture Award recognizes young farmers who do not derive the majority of their income from an agricultural operation they own. Participants will be judged on their involvement in agriculture, leadership ability and involvement and participation in Farm Bureau and other organizations.

Young farmers who earn a majority of their income from their farms are recognized through the Young Farmer Achievement Award. They are judged on their achievements in their farming operation and on their leadership abilities.

This year's YFAA finalists are:

Nick and Beth Tharp, Putnam County -- Alongside Beth's family (parents Phyllis and Mark Legan), and with the help of six employees, the Tharps care for 3,000 sows, wean nearly 77,000 pigs each year and farm more than 900 acres of corn, soybeans and hay east of Greencastle.

A large portion of their time is focused on animal care and soil improvement. According to the Tharps, their most important job is parenting their one-year-old daughter, Kate, who loves visiting the barns.

Matt and Brianna Chapman, Henry County -- Grain, hogs and hay are the foundation of Matt and Brianna Chapman's farm. Matt farms around 375 acres on his own and also helps his father with 2,700 acres of row crops. Another major responsibility is overseeing his father's swine operation, which includes two 4,000-head finishing barns. Brianna, who grew up in Memphis, Tenn. owns and operates a local florist shop. They also have a daughter, Grace, who was born this spring.

George and Carly Kakasuleff, Hamilton County -- George Kakasuleff is the third generation to live and work on the grain farm started by his grandfather in the 1950s. They raise corn, seed corn and seed soybeans. It's important to George and his wife, Carly, that their son Vince has the opportunity to be the fourth generation to work the farm. Carly is responsible for the farm's web and social media presence and has an off-farm job.

This year's YFEA finalists are:

Mike and Sarah Hertsel, Elkhart County -- Mike Hertsel didn't grow up on a farm, but he has fond memories of his grandfather's farm. That's why he and his wife, Sarah, jumped at the chance for Mike to work for a 1,500-acre grain and livestock farm near Syracuse, Indiana, where he performs a variety of tasks. Sarah works part time as a cosmetologist and spends the majority of her time keeping house and caring for their kids, Elizabeth, George and Caroline.

Matt and Carla Schenk, Posey County -- Farming and two ag-related businesses keep Matt and Carla Schenk on the go. Most of their income comes from ag technology business and an excavation business. Matt also works alongside his father, raising corn, wheat and soybeans. Carla, who used to work as a grain grader and merchandizer, now stays home with their two daughters, Ciara and Mattison, helps keep the books, runs two small businesses, and is the market master for the local farmers' market.

The state Achievement Award winners receive a $6,000 cash prize from Indiana Farm Bureau Insurance; 250 hours maximum free use of one M-Series tractor (and loader, if appropriate) courtesy of Kubota Tractor; the David L. Leising Memorial Award; and an expense-paid trip to the national convention to San Diego.

Winners in the two contests, as well as INFB's Young Farmer Discussion Meet (which will be held during the state convention next month), will advance to the national Young Farmer and Rancher contests, where they will compete against young farmers from across the country.

National winners will receive their choice of a 2015 Chevrolet Silverado or GMC Sierra truck, courtesy of GM. The three national finalists in each competition will receive a Case IH Farmall tractor, courtesy of Case IH, as well as a $2,500 cash prize and $500 in Stihl merchandise.