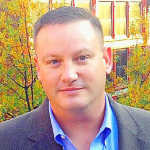 E.J. Claflin has been hired as the new executive director for Putnam County Operation Life and has assumed full-time responsibilities at the ambulance organization as of Dec. 1.

He began his paramedic/firefighting career in the early 1990s in Illinois before transferring to the northeast. Family connections returned him to Indiana in 2007 where he has been since.

Claflin was worked previously as a base supervisor for Lifeline Critical Care Transport/Helicopter and most recently as system coordinator for outreach at Indiana University Health.

Discussing his interest in Putnam County, Claflin indicates he has always been interested in rural EMS and the challenges and opportunities that the rural services bring. Claflin said he was drawn to Operation Life "because of its storied tradition as a quality rural EMS provider."

In his new position, Claflin will replace departing Executive Director Kraig Kinney, who is transferring to a supervisor of EMS education position at St. Vincent Hospital Indianapolis after 10 years at the helm for Operation Life.

"After 24 years with Operation Life and 10 years as director," Kinney said, "I am ready for new challenges and have met my goals for improving patient care delivery within Putnam County."

Asked about goals as the new director, Claflin noted that he wants learn the Putnam County system and meet as many of the community players as he can. He also notes that the rapidly changing EMS field in general demands close observation and adaptation.

"The board is very thankful to Kraig for his years of service at Operation Life,

including improvements in the ambulance fleet and two new substations," OL Board President Larry Timm praised. "But we are also very excited to welcome Director Claflin to his new position, and have the utmost confidence in his capabilities."

Timm, who is stepping down as board president after a decade in that position, will remain on the board and also notes that Kinney is working as director emeritus with newly appointed Director Claflin to assure a smooth transition. Kinney will also likely remain on staff as a part-time paramedic as well.

As a non-profit organization, the OL Board of Directors is a group of community members that represent different facets of Putnam County.

The executive director is responsible for day-to-day operations, including ambulance response and billing operations.

Likely, replacing Timm will be current board Vice President Dennis Weatherford with Cathy Tipton as the new board vice president.