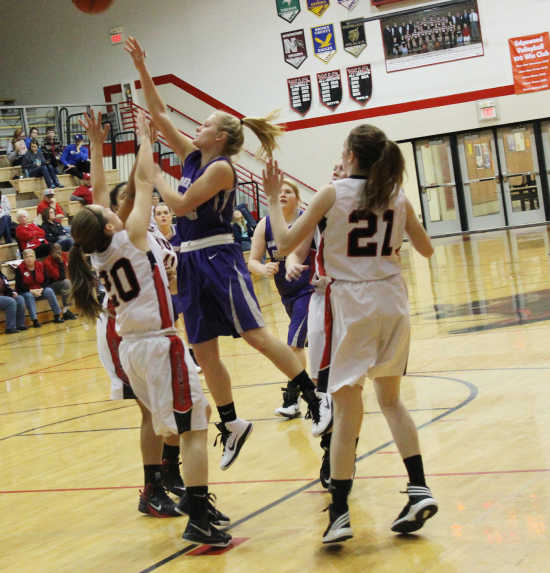 ELLETTSVILLE--A 13-point lead was enough to shut the Edgewood Mustangs down Saturday afternoon as the Greencastle girls' basketball team won 40-35.

That 13-point lead was almost not enough. With just over a minute left to go in the game, Mustangs' forward, Tori Hunter, secured an offensive rebound on which she was fouled and made two free throws to cut the lead to three at 38-35.

Over the course of the game Greencastle built its lead up, which was a testament to winning the first three quarters. Senior Jessica Lenihan put out her effort with 11 first-half points and senior Delanie Stoltey added hers with two consecutive threes and the second responded to a Mustang (4-4) three.

"We need (Lenihan)," Greencastle coach Brad Key said. "Her confidence is sky high. I always say if we get in trouble, let's find Jessica."

Stoltey added more to her showing with two offensive and two defensive rebounds as the second half started. She also picked up an assist.

"Delanie is a good shooter," Key said. "It happened also at Tri-West where they made a run and then she hit a couple of threes. She's a senior and we need her to step up and play for us. So far, she's done a good job of that."

Greencastle had kept the ball secure most of the game, including only three turnovers in the third quarter, but the fourth quarter exploited them. With a commanding 13-point lead, six turnovers kept the Mustangs into it and made it interesting.

"I think Edgewood cranked up the pressure," Key said. "They're man-to-man and they get up in your face. If you don't utilize back doors and if you're not on the same page as your teammate, they're going to cause some unforced errors. They did exactly that, so we've got to get a little bit better. We need to work on that in practice. We need make sure we're on the same page and back-cutting when we should."

Jasmine Carter had her highlight moments of the contest midway through the fourth when she was fouled twice sending her to the foul line for four three throws. She came away with two and she also added a bucket during the mix. Erin Sherfield hit a big three pointer off a Tiger Cubs' turnover and it was only a six point game.

Tiger Cubs' junior Allison White responded with a running jumper of her own to bring the lead back to eight, but that was the only bucket they would see until final seconds.

After another big three-pointer by Mustangs' Hannah Pitcher cut the lead to five and left the game wide open for Curtis.

Curtis got a lucky bounce on the first shot, but calmly put the second through the net to make it a three-point game. Greencastle turned it over again and Payton Acuff had a chance to tie, but turned the ball over.

When Acuff turned over the ball, Edgewood was forced to foul Stoltey to put her on the line for a one-and-one with 28.3 seconds left. She missed the front end and gave life to the Mustangs.

Taylor, who has been the leader for Greencastle, had only scored one point to this moment in the game. Though, she had six offensive rebounds and two assists.

She went to line with eight seconds left for a one-and-one. One free throw would have sealed the game. She made both.

"She's huge," Key said. "We take her for granted sometimes. She can handle the ball and at the end. I have no problem putting the ball in her hands and letting her handle pressure. She's worked hard for this and I'm glad she's on our side."

Edgewood went down the floor one more time, but only a two pointer was shot and missed by Morgan Johnston.

Greencastle won and felt good to get its seventh win under its belts, according to Key.

"It's a good record," Key said. "It's a good start. Our girls are playing good basketball and winning games we feel like we should win. I'm happy with a 7-2 record."

Edgewood had a size advantage on the Tiger Cubs, but Greencastle found ways to adapt. Edgewood was not very disciplined with space and the Tiger Cubs' guards would drive and get fouled as they jumped. As a result, they had six free throw opportunities in the first quarter alone.

"I don't think the second quarter we did as great of a job attacking," Key said. "I thought there were even times in the second half when we didn't attack enough. We're still coming together. It's still early December, so offensively we seen some really good things, but also some things we should have capitalized better on. We wanted to get the lead to 16 or 17, but I'm proud of the girls holding on and closing that game off."

"I feel like we had good energy," Key said. "We talked about that in practice and showed in film where we didn't get to some rebounds against Tri-West (lost Tuesday 64-50.) Tonight we did a really good job of that, especially in the first half. I think we started to struggle a little bit in the second half."