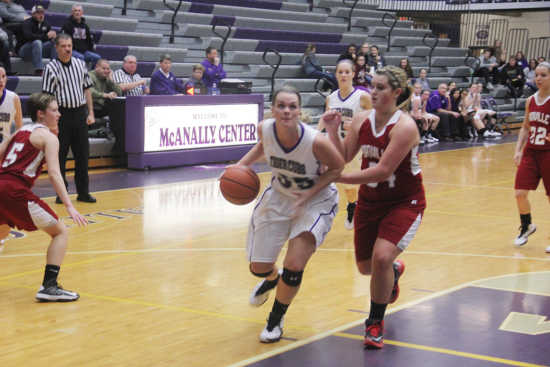 The Greencastle girls' basketball team was without its standout center, senior Jessica Lenihan, when it played against Danville on Tuesday. While senior Lauren Bridgewater filled the role nicely and gave the Lady Tiger Cubs some range throughout the game, the home team still fell 63-41.

The Tiger Cubs found points difficult to come by in the early parts of the contest, but they also played a consistently good defense that held the Warriors to seven, while scoring three. 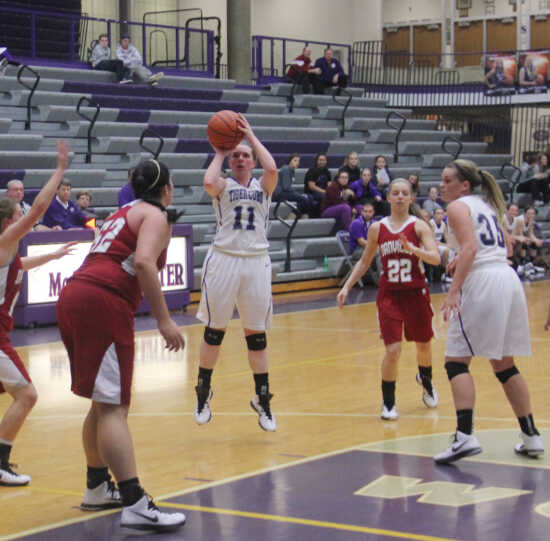 Greencastle's Callan Taylor rises up for two points in the second quarter of the Danville loss. (Banner Graphic/JAY LOCKETT)

"We got great shots in the first half, we just didn't hit anything," GHS coach Brad Key said. "In the first quarter only scoring three points against a good sectional opponent isn't going to cut it. I wasn't mad about our shots selection. We just didn't hit the shots."

Greencastle was able to improve its scoring output in the second quarter, using Bridgewater to consistently attack the rim or kick it to three-point shooters. She scored six points along with a three-pointer from junior Paige Bragg and four from senior Callan Taylor who knocked down two foul shots.

Unfortunately the Lady Tiger Cubs couldn't suppress the scoring of Danville who scored 18 points in the second to Greencastle's 13.

"Some nights you'll have nights like that but if you do you have to step up your 'D' or figure out some way to keep in the game," Key said. "I felt like we played really hard. We were a player down. Jessica Lenihan had the flu. So we did a little adjusting but I thought we played well for a while."

After starting the second half down 25-16 Greencastle, began to close the gap. A three by senior Delanie Stoltey and a bucket by Bridgewater, coupled with a foul shot by junior Allison White, got the Tiger Cubs got to within three points of the leaders.

But turnovers began to plague the Tiger Cubs who had 10 turnovers on the night.

Greencastle managed to stay out foul trouble and the Warriors had 16 team fouls, 10 in the second half but the home team was just unable to get enough shots to drop to keep pace with Danville's scoring pace.

"We got it to within three," Key said. "Then one turnover changed the direction of the game and we couldn't recover from it. We had some silly turnovers that we've got to eliminate if we are wanting to beat a Danville type of team. We shot eight for 17. That can't happen."

Bridgewater was able to stretch the Danville defense and hit two threes on the night that led to her team-high 16 points. Burgeson and Taylor also netted buckets from long range in the fourth, leading to 14 fourth-quarter points.

"I thought Lauren Bridgewater stepped in and did a really good job," Key said. "Callan did a good job of handling the ball tonight. If it wasn't for Callan I think the score would've been way worse."

The Warriors however scored 15 in the fourth and never really let the game get close again.

Greencastle will next play Cloverdale at home in a girls-boys varsity double header beginning at 6 p.m.