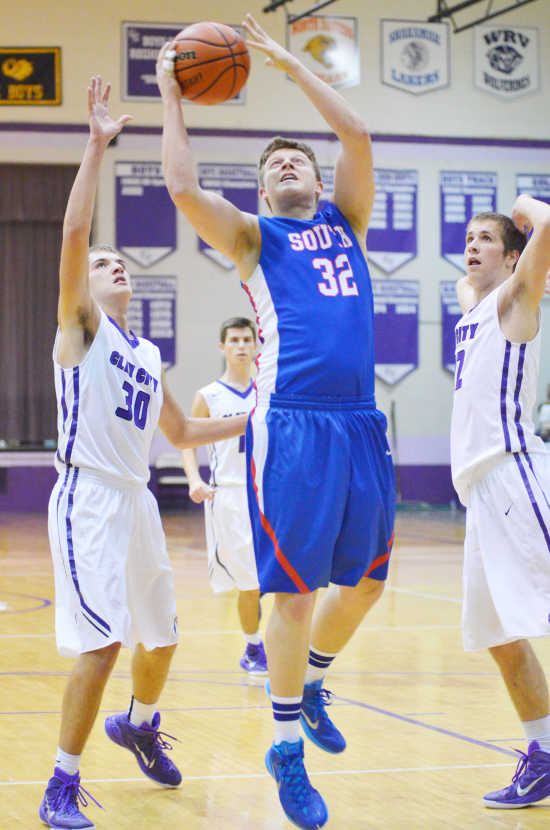 Jacob Carmichael of South Putnam takes to the lane and goes up for the jumper. (Banner Graphic/TRENT SCOTT)

The Class A No. 9 Eels were in no mood to slip below .500 themselves and punished the Eagles with a barrage of first-quarter three-pointers that helped the hosts to a 67-32 win.

South Putnam head coach Greg Dean said that facing a team with multiple pieces back from a semi-state run was going to be difficult.

"We knew it was going to be tough because they've got a lot of talent and have got everybody back from last year," Dean said. "They have a lot of athletes who can shoot and attack the rim.

"We knew we had to do a good job of keeping them out of the lane and we didn't do the job that we wanted to do. It was really physical and we got to the foul line quite a bit and I'm proud of the kids for being aggressive, even more so tonight than we were last week in the county tournament."

While Clay City would only shoot 28 percent from behind the three-point arc, the Eels knocked down 4-of-8 in the first quarter, taking an early 7-5 lead and turning into a 23-6 advantage after eight minutes of play.

The early barrage hurt the Eagles but Dean said the squad made adjustments on defense to keep Clay City off balance.

The Eagles hung tough in the second quarter as the hosts only hit one three in the frame and looked out of synch as the visitors played even basketball to go into the break down 34-17.

South Putnam came out of halftime only to find Clay City pressing higher up the court, leading to nine Eagle turnovers and led to numerous easy baskets for the Eels.

"We have to execute our offense and run our stuff," Dean noted. "So many times, we break down early and then it comes to us to attack the rim and people are scrambling.

"We've got to do a better job of being fluid in our offense where we're going side-to-side with scoring options, do it with more efficiency and open up some things for different guys. That should give guys like Jacob Schroer, Trevor Long and (Chad Menke) some looks."

After three bruising games in five days, South Putnam gets two days to prepare for its WCC opener Friday night against Cascade.

Dean said that the team would need to be ready for a similar attack plan from the Cadets.

"I think it's a great opportunity for us in terms of bouncing back," Dean said. "It's a rivalry game, a conference game at our place and I'm sure the kids will be excited to play in it.

"We'll have a game plan put together and two days to prepare, so we're anxious to get in the gym and start talking about Cascade. They'll do a lot of the same things we've seen and we have to be ready for it."