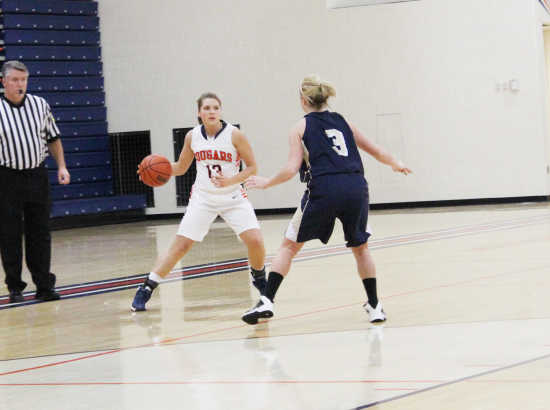 Senior Kayla Clodfelter looks to pass early on in the game. The Cougars committed a season-low 19 turnovers because the passing was superb. (Banner Graphic/JAY LOCKETT) 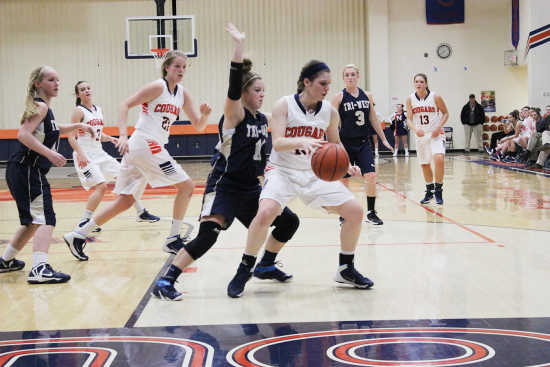 North Putnam senior Kaitlin Mindiola drives the baseline and tries to find some space while being guarded by Claire Johnson. (Banner Graphic/JOHNATHON GOODE)

"It's the best game we've played all year," Cougars' coach Jim Spencer said. "We got a really good team effort on both ends of the floor from everybody. We turned it over less than we have all year and we still took good shots. It was just overall a strong game for us. We weren't in a position to win the game, but we played the best we have all year."

Tri-West (6-1) is known for getting to foul line, averaging nearly 24 attempts per game. This includes a game where they shot 30 and made 27; on the season they average about 75 percent makes. The Cougars (1-8) only fouled five times for the entire game, in which the Bruins shot five free throws and made four. Claire Johnson shot all six.

"We really wanted to emphasize not fouling," Spencer said. "For the most part we did a good job. "

The Cougars had only given up 21 points by halftime, but despite the good defense they could only score five points. They were 2 of 8 from the field and 1 of 2 from the line and had 13 turnovers.

Bruins' forward Karen Jones was the catalyst factor of the contest. She went 8 of 9 from the field and she scored all her team's 10 points in the first quarter. Six of those points came off offensive rebounds, which she had five for the game.

"She was just too athletic for us," Spencer said. "She beat us on the offensive end and on the offensive boards. She had several steals and she was clearly the best and smartest player on the floor."

North Putnam started getting hot by the third quarter. On the first play the Bruins left senor Kaitlin Mindiola wide open underneath the basket for a passing Taylor Nauert. Nauert, a junior, scored two points of her own in the quarter and junior Maddy Smith ended the quarter by shot faking Johnson and burying a three-pointer from the right corner at the top of the perimeter with no time left on the clock.

Zero offensive rebounds are what the Cougars gave up in the second half, which is a magnificent turn-around from past games. After giving up 15 in a half to Owen Valley last week and seven in the first half of this game, the Cougars started blocking out and results followed.

"We did a good job of blocking off," Spencer said.

North Putnam did not win a quarter in this game, but they only lost the second half by four. Nauert buried a three midway through the final quarter, which her team's confidence. They made good passes for long possessions and as a result they only shot 11 times in the quarter and Tri-West shot nine times.

Turnovers could have been the reason for low shooting numbers on most nights, but the Cougars committed a season-low 19 turnovers for the game and only six in the second half. This alone shows the improvement this team has sustained since the beginning of the season.

"They continue to do a good job of paying attention in practice," Spencer said. "We want to run and make good decisions. We didn't take any bad shots and we're cutting down on the foolish turnovers. In all aspects of the game we got a little better tonight."

North Putnam will have a good chance to show its improvements even further on Dec. 16 when the Cougars travel to North Vermillion.