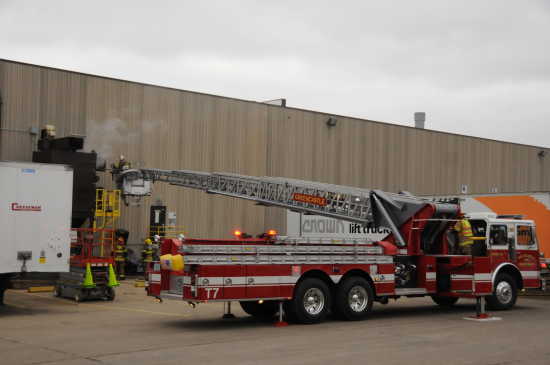 A Greencastle Fire Engine extends a firefighter at the scene of a fire at Crown Equipment in Greencastle Wednesday afternoon. (Photo by KYLE HOLLINGER)

When a dust collection unit caught fire at the Crown Equipment Corp. building on Greencastle's East Side Wednesday afternoon around 1 p.m., firefighters from multiple fire departments were quick to arrive and begin extinguishing the blaze, according to Crown engineering manager Dan Boatright.

No injuries were reported from the incident and the scene had been cleared by emergency service personnel around 3:30 p.m. 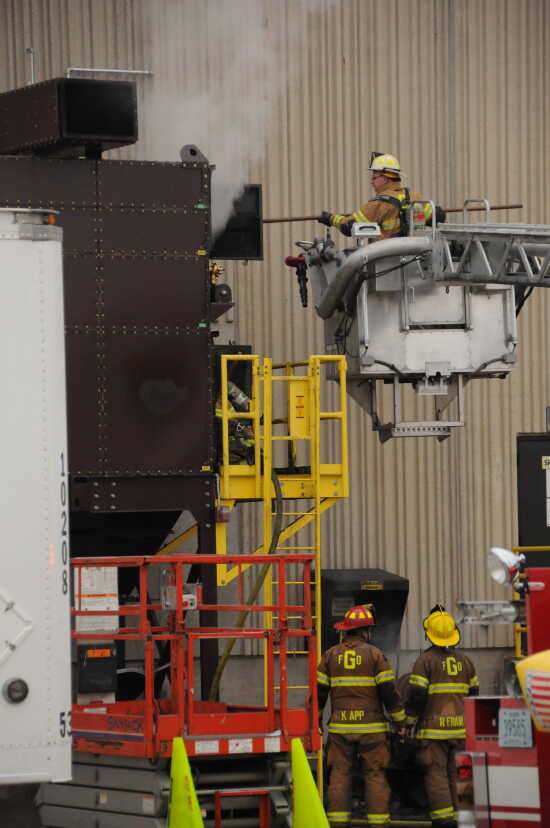 Firefighters work together to extinguish a dust collection unit on the south end of the Crown Equipment building after it caught fire Wednesday afternoon in Greencastle. (Photo by KYLE HOLLINGER)

Cause of the fire on the south end of the building is still being investigated but according to Boatright, the Crown Emergency Response Team (CERT) was quick to alert and work with fire departments during the incident.

"Root cause analysis is under way. It's premature to say what the root cause is," Boatright explained.

"Our internal CERT team did an outstanding job," he praised.

The fire was contained to a dust collection unit, although some smoke did breach into the main building, located at 2600 E. State Road 240 in Greencastle, resulting a short evacuation of employees in 33-degree temperatures. 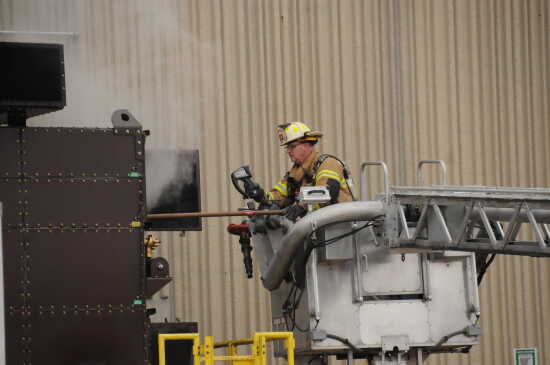 A member of the Greencastle Fire Department takes a temperature reading while suspended by a fire engine basket on the south side of the Crown Equipment building in Greencastle Wednesday afternoon. (Photo by KYLE HOLLINGER)

No damage estimate was available.

"We had smoke showing when we arrived," Greencastle Fire Chief Bill Newgent said, "and when we got around the back we had flames coming out of the unit."

The "dust" being collected is actually tiny bits of steel that are the result of "blasting" steel surfaces in preparation to be painted.

Production at the plant has not been slowed by the incident, Boatright said, as an older, backup dust collection unit is being used as a temporary replacement.

Boatright cited the investigation process and the safety of employees as a paramount concern for the company.