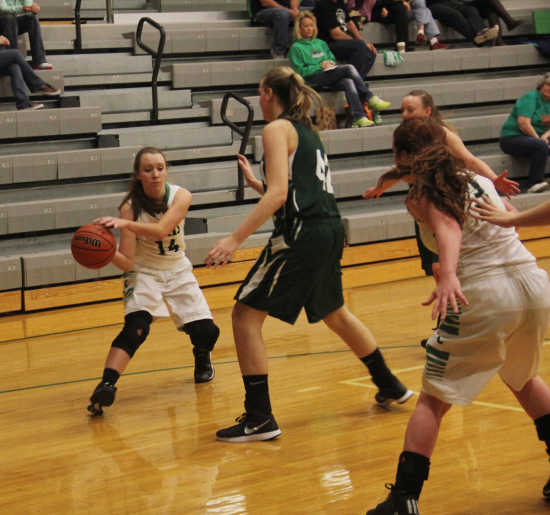 Cloverdale junior Haley Hamm (14) looks to pass to senior Bailee Stevens (3) who is posting up in the paint. (Banner Graphic/JAY LOCKETT)

CLOVERDALE--The Lady Clover basketball team has experienced difficult shooting nights for the past few games and it continued on Saturday against Monrovia. However the Clover effort on defense kept the ladies in the game until the end, where they couldn't make the plays to win. The Bulldogs won 36-32.

"I thought this was a great step in the right direction for our defense," CHS coach Matt Langdon said. "We've said that for a couple of weeks but this is a good offensive team."

The shooting struggles began early for the Lady Clovers, who after one could not find the net and were unable to score. They went down 9-0 after one.

"It really just ended up being that we didn't score in the first quarter," Langdon said. "We played great defense. We held them to as few a points as we could've in the quarter. But when you lose by a few points. That's the end of the story there. If we get a couple baskets in that first quarter th4n the game could've been different."

After the first quarter the Clovers actually outscored the Bulldogs in each of the final three quarters albeit only by a few points each.

The second quarter saw some baskets fall from long range. Junior Kimmy Winders, the Cloverdale leader in points, nailed two threes and junior Payton Dorsett added another one. Senior Laura Worthington completed the quarter with a basket but Cloverdale went 0-4 from the foul line.

The hosts were able to hold Monrovia to nine, only giving up one three. Cloverdale went into halftime down 17-11.

The comeback effort continued on the Lady Clover part in the second half and it again was made possible by the defense. Senior Baillee Stevens constantly pressure the Monrovia guards into tough passes and she came away with four steals. Cloverdale also clamped down on Monrovia passes into the lane.

The home team began make shots from the lane more difficult as well.

The Lady Clovers faced a mismatch inside with 5-7 Dorsett and 5-7 junior Angela Pieper guarding the 6-1 Bre Tharp and 5-9 Alaina Longere.

The Monrovia point guard Kenna Hunter stood 5-9 and typically found herself trying to get around the 5-4 Stevens. The Clovers still did their job and once again help them to just nine points while scoring 10 themselves via two threes, two free throws, and a bucket.

Langdon said the defensive mindset and the players' willingness to listen helps Cloverdale in its efforts to keep opponents from scoring.

"We talk about angles a little more," Langdon said. "The girls are just buying in and listening and wanting to improve. I think every player and every coach needs to have open ears and always want to hear suggestions."

Cloverdale may have the opportunity to avenge the loss after Christmas in the Monrovia Tournament on Dec. 27. The Clovers play Edinburgh first at noon and if they win and Monrovia beats Bethesda Christian, then a rematch would ensue.

A strong defensive effort will be needed again for Cloverdale to emerge victorious from that tournament.