By JIMMY BEASLEY SR., For the Banner Graphic 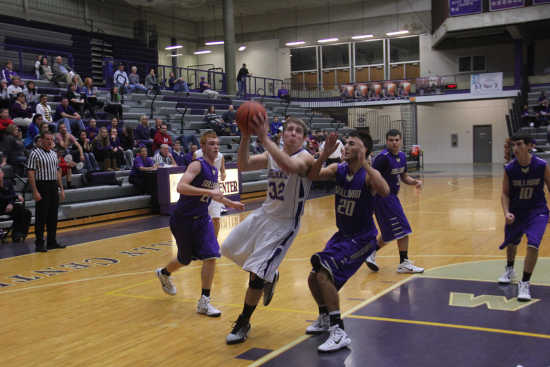 Bollman goes up for a layup in a game against Sullivan. He had six points against South Vermillion. (Banner Graphic/JAY LOCKETT)

CLINTON--The Greencastle boys' varsity basketball team traveled to Clinton to play the South Vermillion Wildcats in their final game of 2014. The Tiger Cubs, were hoping to stop a two-game losing skid since winning the annual Putnam County title two weeks ago. Greencastle will head into its Christmas break on a winning note taking the game 46-31.

"We really got off to a great start, winning our first three games. We're excited about getting back on the floor tonight. We had a couple games where we lost but one thing I know about our guys is they're always going to compete and they're going to play hard.

The Wildcats jumped out to an early 6-0 lead, but Greencastle came storming back with a rebound basket by senior Brody Bollman. Junior Ryan Coble added a long three to make it a 6-5 game at the 2:35 mark. Freshman guard Colin York hit a long three at the 1:39 mark to pull within one at 9-8. With just 55 seconds to play in the first York added his second triple of the game to give his team an 11-9 lead.

The second quarter saw the Wildcats out score Greencastle 10- 6 to go into halftime up 19-17.

"I was very pleased with the way we finished the first half. York kept us in the game hitting those two big three's. He's handled everything we've thrown at him this season and he's never said a thing. He's a very quiet player who gets the job done," coach Greenlee said.

In the third the Tiger Cubs tie the game at 21-21 when senior guard Anthony Mitchell hit a bucket at the 5:35 mark.

"I really have to give Anthony and fellow senior guard Colyn Foxx credit, they get the job done when it's needed. They don't get a lot of the headlines but without them we'd be a different team," coach Greenlee said.

"After losing two games I was anxious to see how we rebounded tonight. Even though we were down at the half we were happy with where we were at, me had several turnovers but we're just down two. We talked about it the half, and we come out in the second half, once we tied the game, we took off and played like we're capable of. I'm very happy.

"We go into the Christmas break with a 4-2 record, we won the county, and our young kids have played well. We've had good leadership from our seniors and that all you can ask. Were now off two weeks, then have to play a very tough Danville squad to open the year," coach Greenlee said.