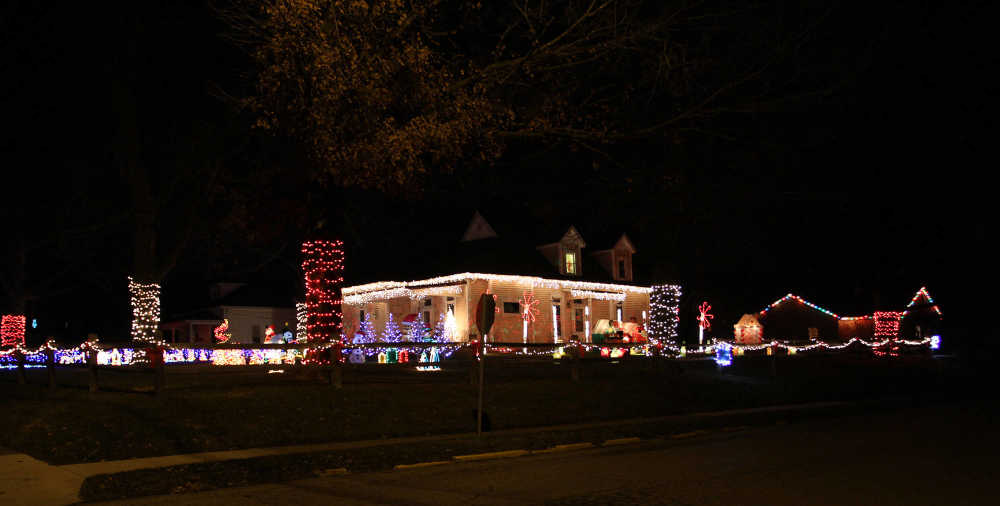 The Justin and Brittany Eubank home at 1025 S.Indiana St. in Greeencastle (corner of Indiana and Berry streets) has been named the winner of the 2014 Home for the Holidays decorating contest sponsored by the Greater Greencastle Chamber of Commerce. (Photo by LAUREN BOUCHER)

Forget about those old bubble lights, plywood cutouts and trendy tinsel, the computer age has arrived for the Home for the Holidays Christmas decorating contest.

The home of Justin and Brittany Eubank, at the northeast corner of Indiana and Berry streets in Greencastle's South End, is the 2014 winner of the Greater Greencastle Chamber of Commerce contest, making Justin Eubank a second-generation winner.

"He was really the mastermind behind the display at his parents' home," Chamber Executive Director Tammy Johnson said of Justin in announcing the contest winners.

The Eubank family won the 2003 contest for its display at 228 Hillsdale Ave. But that was pretty much old-school lights and static displays.

The decorations on display this year at 1025 S. Indiana St. -- which earned the Eubanks the $100 Walmart gift card as top prize -- feature a computerized light display.

Spectators who turn their car radio to the frequency 106.9 FM can see that the lights are actually synchronized to music.

Like the Eubanks, the Dixons are veterans of the local decorating contest, having won in both 2011 and 2012 (with the Eubanks second in 2012) and taking second place in 2010.

The Chamber also listed a pair of honorable mentions, decorations worthy of driving out of your way to see as well.

Those are the Greencastle homes of Deborah Phillips, 824 Gardenside Drive, and Darlene Bell, 1014 Avenue C.

"There was not a huge difference in the scores this year," Chamber Director Johnson said. "That's why we had two honorable mentions as well."

While the number of entries has declined a bit in the last couple of years, the 2014 contest still offers a wide representation of Putnam County homes with entries not only from Greencastle but Bainbridge, Roachdale and the South Putnam area.

Justin Eubank said his family has decorated its homes for "a long time" as a project his grandfather (Bud Lady), dad (Ron Eubank), brother (Nathan) and now his wife Brittany have all embraced.

He couldn't, however, put his finger on an exact number of lights in the display that dominates both the South Indiana and Berry Street sides of his home, but noted that it took three weekends to fully install due to a couple weather-related setbacks along the way.

"I know we have a whole lot of extension cords," he said, noting that a computer in the house runs controllers outside that alter the intensity and speed of the lights according to the music he plays over 106.9 FM.

Besides the lights, the Eubank home also features Santa waving from an upstairs window on the Berry Street side, along with light poles that blink up and down and change color in rhythm, while 25 mini trees change colors to the music on the Indiana Street side.

Eubank said his computer-synchronized display is illuminated from 5 to 10:30 p.m. nightly "unless it's pouring down rain, then we turn it off."