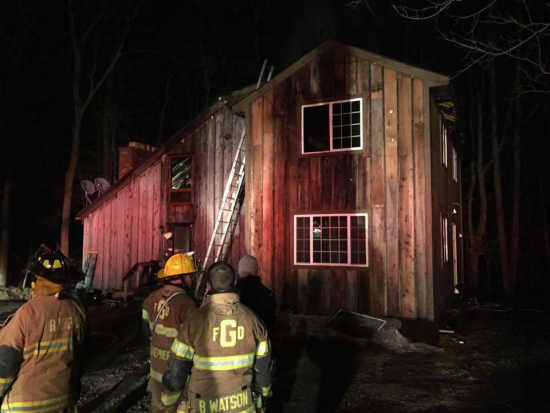 An early morning fire in Madison Township on Sunday left a home heavily damaged as the blaze, which started in the chimney caused extensive damage to the living room and upstairs areas of the home.

A house fire resulted in heavy damage but no injuries at a Madison Township residence early Sunday morning.

The Madison Township Volunteer Fire Department was dispatched to the home of Troy and Diane Pierce at 25 S. Wooded Hills just before 1 a.m. on reports of smoke coming from the home.

According to Madison Township Fire Chief Lee Price, firefighters arrived on scene shortly after finding heavy smoke coming from all sides of the home along with small flames coming from one exterior wall of the rustic home.

"We had various small flames showing from an exterior wall where the chimney was," Price said. "At the time of our arrival and through the whole fire, the fire was never on the outside other than a real small spot next to the chimney."

The home, which was being remodeled by the homeowners, suffered extensive damage within the living room area as well as smoke and water damage throughout the home. It was those renovations that also caused local fire departments extra difficulty in extinguishing the blaze.

"There was an add on to the house and they built it over the roof, which was already there," Price explained. "It created a void space that we didn't know anything about. From the time I arrived, we were able to control the fire probably within 25-30 minutes. However, the big problem that we ran into was within the big void area, which lit up again. Once it traveled and got into the attic it got into that void space, which caused us a lot of problems. In total, it probably took just over an hour and then there was extensive overhaul."

Fighting the cold and being shorthanded, crews used more than 8,500 gallons of water to control the blaze, which resulted in a total loss to the home with the bulk of the damage being to the living room area where the chimney was located, as well as the upstairs area.

"Between being short handed, the cold temperatures and the extent of the fire it was kind of rough," Price added. "We didn't really have to do anything differently. It was a matter of the guys getting cold. We had some issues with some people's gear freezing due to it being wet."

While much of the fire was knocked out fairly quickly, firefighters remained on scene until roughly 4:30 a.m. to complete overhaul at the home.