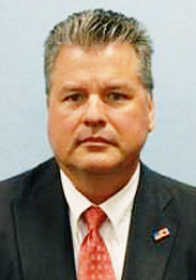 New Putnam County Sheriff Scott Stockton will be the featured speaker Monday, Jan. 12 at the monthly meeting of the Greencastle Defenders of Liberty.

The public meeting will begin at 6:30 p.m. at the Dixie Chopper Business Center at the Putnam County Airport, 102 Ballard Lane, Greencastle.

He served the Indiana State Police in various capacities for 28 years, having been chosen as one of 40 out of 3,500 applicants in 1985.

Stockton worked Wayne County for seven years, then participated with an interdiction program. He then transferred to undercover operations where he represented the department by being assigned to the Drug Enforcement Agency for two years. He was then assigned to the Alcohol, Tobacco and Firearms for another two years.

Stockton was then promoted to assistant commander of Special Investigations, then to commander of the Drug Unit. In July 2013, he was selected to go to the FBI Violent Crimes Unit.

He has received two U. S. Attorney Awards for outstanding investigations.

The public is invited to meet with the new Putnam County sheriff.

There will be a short question-and-answer session following his presentation.