'Health Hero' Hamilton finds his own heroine in Becky Howard

By Dr. JOHN BOTTORFF, Special to the Banner Graphic 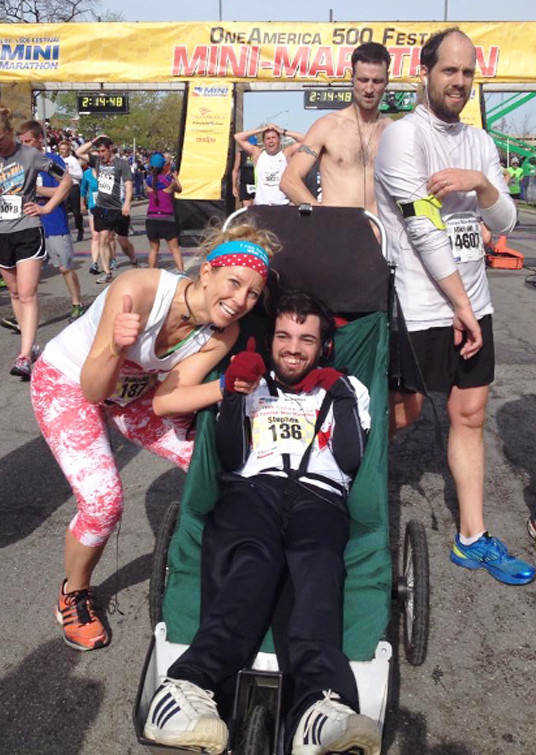 Becky Howard and Stephen Hamilton celebrate at the finish line of the 2014 Indianapolis Mini-Marathon.

How does someone who has never been able to ride a bike, walk or swim complete an Indy Mini-Marathon?

Stephen was born prematurely at 28 weeks and weighing a little more than two pounds. One of the resulting effects was a condition know as Cerebral Palsy, a neurological condition primarily effecting motor control centers in the cerebellum, thus the name. In Stephen's case it has left him in a wheel chair and highly dependent on others.

At first Stephen's mother, Julie Ratcliff, felt sorry for her son and herself.

"With time my prayers changed from, 'Please let him walk,' to 'show me opportunities for Stephen,'" she said.

She and her husband Larry, who is the Area 4 director for Special Olympics, focus on his abilities, on what he is capable of doing. As a result, 27-year-old Stephen has been snow skiing, water skiing, sky diving, swam with the dolphins and parasailed.

In 2012, the challenge was changing. A series of events brought in a new player by the name of Becky Howard from Greencastle. Julie Ratcliff describes Becky as a "rainbows and unicorns" person who wants to make an impact.

Howard started on the road to fitness in 2006. With time she has lost 45 pounds, and has run in countless events, including a number of half marathons and marathons. She has participated in three Ultra-races where a participant runs as far as they can go for eight hours. She ran 38 miles in one race, while running 40 miles in the other two.

At the end of the 2012 Indy Mini-Marathon, Howard received a bottle of water from Stephen who was handing them out at the finish line for Special Olympics. Stephen wasn't there in 2013, and Becky contacted Julie to see why. During their conversation, Julie expressed a desire to push Stephen's chair in a walk-run effort in the 2014 Indy Mini. Race rules allow for two people per wheelchair, and Julie was hooked.

With the severe winter last year, Howard only had three opportunities to practice running and pushing Stephen in his wheelchair. A mile into the 2014 Indy Mini, Julie had to stop due to her ankle. Without hesitation, Becky took off on a solo effort.

While Stephen was encouraging everyone and getting "high fives," Howard was maneuvering a wheelchair that wasn't made for racing, through other runners for 13.2 miles. They even stopped to take photos at the Indy 500 track. With all that, Becky and Stephen busted a jaw-dropping finish time of 2 hours 12 minutes.

There is an effort to get Stephen a specific wheelchair for assisted racing. It is made by Team Hoyt. Persons may Google Dick and Rick Hoyt, a touching story of father-son team with similar circumstances, who now build custom made wheelchairs fit for both the rider and runner.

So what does Stephen think of all this?

Well, he thinks it's "Cool." And in his prayers every night, among others, he thanks God for Becky Howard.