GHS falls on the road to Lady Pats

BY TRENT SCOTT For the Banner Graphic 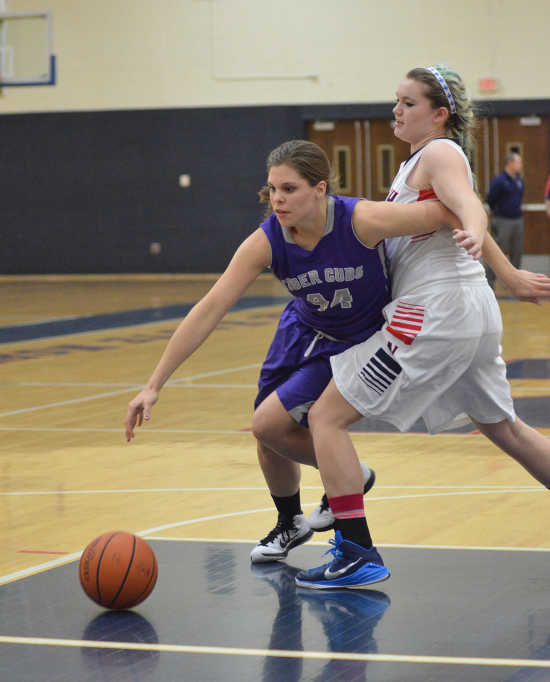 TERRE HAUTE -- Having started 2015 with a win, the Greencastle girls' basketball team looked for a second straight win when it traveled to Terre Haute North Thursday night.

The Patriots came out of the blocks blistering from three-point range, knocking down 4-of-6 in the first quarter and 12 for the game to hold off the Tiger Cubs 64-55.

Greencastle coach Bradley Key said the team could not quite come to grips with the Patriot shooters.

"Terre Haute North shot the ball really well," Key said. "There are two reasons for that. They've got players who can shoot and we allowed them to spot up and shoot. I tell the girls that any night, anyone can play PIG and tonight, we left too many good shooters open."

Lauren Curley pushed Terre Haute North ahead quickly in the opening quarter, scoring the first five Patriot points and 11 in the quarter.

Staring at a 16-4 deficit late in the quarter, Callan Taylor knocked down a three that trimmed the deficit to 16-7 and while the quarter ended with Greencastle trailing 18-7, the Tiger Cubs were showing signs of life on offense.

The visitors traded points for much of the second quarter, scoring the final eight points of the frame behind a Bethanie Burgeson three, two Taylor jumpers and a free throw by Mia Stevens to go into halftime trailing 31-23.

Terre Hate North responded by again going 4-of-6 from behind the arc. Natalie Egan hit three of the four and scored 11 in the quarter as the Patriots punished lapses by the Greencastle defense to take a 53-35 lead into the final quarter.

Key said the girls were not quite able to get out to the corners and the Patriots were quick to pull the trigger.

"Give credit to Terre Haute North," Key said. "They moved the ball well and got their shooters the looks they needed to get.

"It was an interesting game. It's never great when a team hits 12 threes against you but we've got to do a better job of covering up."

The Tiger Cubs finally showed their own outside touch in the fourth as Paige Bragg knocked down a three, followed by a pair of threes from Burgeson and Taylor.

However, the shooting show would not be enough as the Patriot lead through three quarters allowed the hosts to take the blows in stride and send the visitors to their fifth loss of the season.

While the offense began to rev up during the final minutes, Key said the team needed to be able to score in all four quarters.

"We think we're a good team, so we should be able to run an offense against anyone," Key said. "I thought Callan did a good job of getting to the basket and distributing the ball when she settled down.

"In the fourth quarter, Bethanie knocked down two threes, which helped narrow the gap a little bit. Mia Stevens and Lauren Bridgewater held down the floor down low and did a solid job."

Greencastle has a week to prepare for its next game against South Putnam, the first conference game in over a month for the Tiger Cubs.

Key said holding on to the ball would be paramount to winning against a scrappy Eagles squad.

"We've got to make sure we eliminate the turnovers," Key said. "We know that South Putnam is going to come for us.

"It's a conference game and they're going to get up for us. We've got to make sure we're protecting the ball, taking good shots and getting our teammates good shots.

"Tonight, I saw a lot of what we want to do and some things we can't do if we want to win a conference and sectional title," Key added. "If we want to win the WCC, we've got to be ready to go next Friday night."