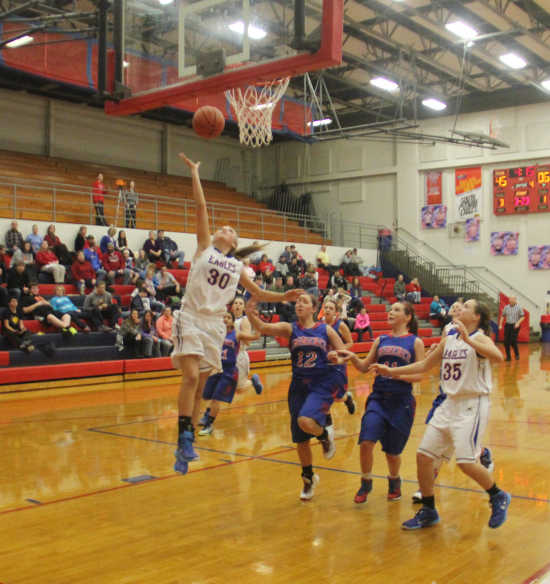 The Lady Eagles scored early and often Thursday when they took on Eminence for the second time this season. The second game was as lopsided as the first but with less scoring from the Eels as South Putnam took the easy victory 52-6.

"We did a good job getting after the ball defensively," Eagle coach Tim Garver said. "The bottom line is that's the way we play. We try to get the girls to play hard-nosed defense."

Early in the game it was clear that South Putnam had the advantage. The Eagles scored the game's first 18 points before the Eels could get off a decent shot. Three times Eminence was called for a five-second violation on the inbound and twice for over-and-back.

After the 23-2 first-quarter lead, which saw freshman Miranda Bieghler hit two of her three threes, junior Lillie Stein score six and senior Katelyn Lady knock down a three, the Eagles continued the attack into the second quarter.

"It was positive that no matter who was in we all played well together," senior Emily Dobson said. "I'm really proud of those younger girls that were stepping up, playing hard and being aggressive the whole time." 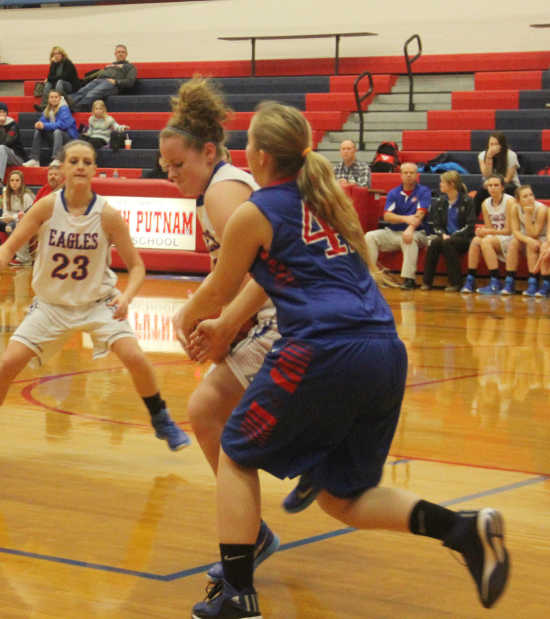 Senior Katelyn Lady of South Putnam fights for a steal during the win. (Banner Graphic/JAY LOCKETT)

South Putnam's aggressiveness on defense led to plenty of extra possessions as the home team walked away with 18 steals on the game.

"I think it was nice that we could all play and that we all had the chance to score," Lady said. "It was helpful that our bench could come in and keep up the same pressure as our starters."

With the halftime lead secure at 35-4, Garver went with the reserve group who was up to the task. Juniors Jessica Modglin and Rebecca Hazlett, freshman Maddie McHugh and sophomore Logan Hawkins each with two scored of the quarter's eight points. As the starters rotated in the defense never faltered and Eels again were held to just two points in the quarter.

"We got to play a lot of kids tonight," Garver said. "We played a lot of kids that don't normally play a lot. The good news is that they still had to use defensive principles that we teach and I thought they did great too."

The defense never let up as Eminence was held scoreless in the final quarter. While Eminence was struggling to score at all, South Putnam was focused on trying to get its senior, Ariel Higgins, on the board. 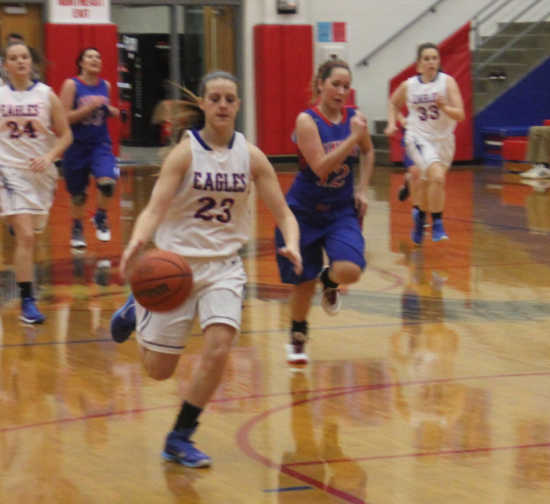 After a few failed attempts and with less than 10 seconds on the clock, Higgins knocked the ball lose and sprinted up the court to receive the pass from junior Cydney Erickson. She was able to score the bucket with two seconds left as the bench celebrated.

"I'm really glad that everyone got the opportunity to play," Higgins said. "I think it really brought us together as a team. We had a different combination of people. So it showed us that no matter who is in we can really play as a team."

This game was one of a stretch of games that Garver beleives offers good chances for the Eagles to improve their game.

The next match for South Putnam is at Riverton Parke on Tuesday as the Linton-Stockton match was post-poned.