Gary Michael (Mike) Monnett, 55, Cloverdale, died at IU Methodist Hospital in Indianapolis on Wednesday, Jan. 7, 2015 around 7 p.m. due to complications from a massive heart attack. Mike was surrounded by many loving family members at his time of death.

Born on Oct. 20, 1959, to Margaret (Hinkle) Miller and Eugene Monnett in Greencastle, both of whom preceded him in death. 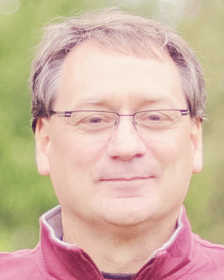 Mike grew up in Cloverdale, and was a 1978 graduate of Cloverdale High School.

He attended DePauw University (1982), studying accounting and finance during his time there. While attending DePauw he played baseball as pitcher/catcher for the Tigers where he was named MVP.

Mike became a CPA and worked out of Elkhart before establishing his own CPA firm in Cloverdale.

On July 1, 2000, he joined Our Community Bank as a Vice President/Chief Financial Officer. He also served on its Board of Directors.

He was a member of Cloverdale United Methodist Church.

Mike was a very family-oriented man who loved to be surrounded by his loved ones. He enjoyed playing cards or board games and big family dinners. Over the past year, his enjoyment was centered around his grandchildren who he loved so much.

Additionally, all who knew Mike knew him as an avid sports fan who followed Cloverdale athletics, IU football, basketball and baseball, as well as the Indianapolis Colts. He also loved auctions, flea markets and collecting coins.

Mike will be remembered as a humble man who had a very kind, gentle soul. He was a giving and selfless person, who continually thought about the needs of others. He loved others deeply which was expressed simply by the twinkle in his eye

Services will be conducted at 11 a.m. Monday, Jan. 12 at Whitaker Funeral Home, Cloverdale, where family and friends may call 4-8 p.m. Sunday, Jan. 11.

Interment will be in the Cloverdale Cemetery.

Condolences may be sent to the family at: cds@whitakerfuneralhome.net.