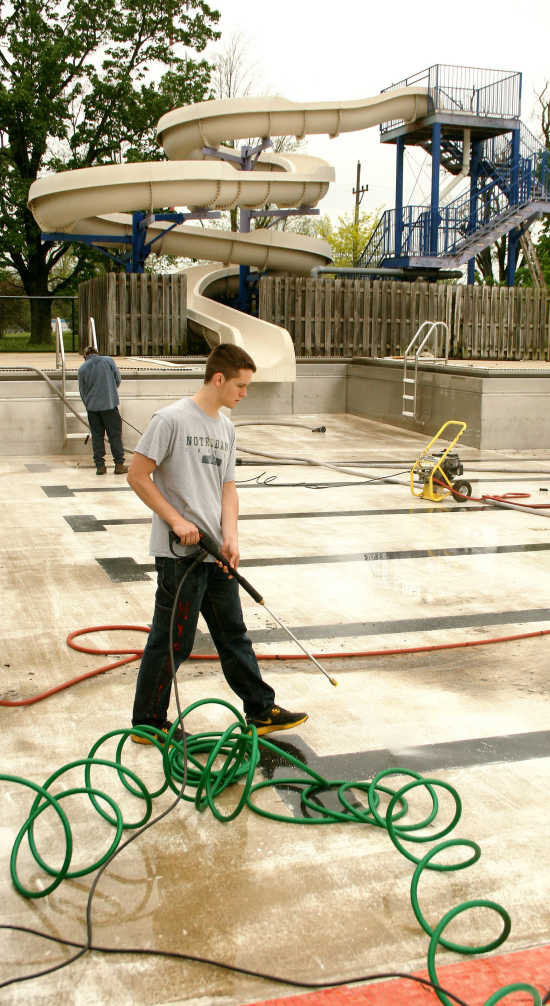 While power washing the bottom of the pool at Robe-Ann Park is a common occurrence, such as Mitchell Ball doing the job in the spring of 2013, the Greencastle Aquatic Center will get much more of a face lift in 2015. At the close of the 2015 season, the pool will receive its first total repainting since 1999, Park Director Rod Weinschenk announced recently. (Photo by ERIC BERNSEE)

Three main projects are on the minds of Greencastle Parks and Recreation Department officials as they plan for 2015.

Repainting the city pool at Robe-Ann Park for the first time this millennium, renovating the old community building at Jaycee Park and repairing the tennis courts at Robe-Ann Park are this year's targeted projects, Park Director Rod Weinschenk said.

He also reviewed his department's 2014 accomplishments for the Park Board during its January meeting at City Hall, listing completion of the Bob York Memorial Splash Park as "by far the biggest thing we did in 2014."

"It was huge," Weinschenk said of the ambitious project spearheaded by the Greencastle Civic League.

The donation of the Big Walnut Sports Park to the City of Greencastle marked another major step forward for the department in 2014, putting the city in charge of the entire sports park property on the East Side of town.

"We survived the worst summer for aquatics that I've seen since I started (his career) in 1985," he said of the cooler-than-normal season that adversely impacted pool admission and concession revenues.

"Hopefully that changes this year," Weinschenk added. "It's time for a nice, warm summer."

Another noteworthy development last year was an explosion of local 5K run/walk events. Usually sponsored by a non-profit group or volunteers trying to raise money for a specific cause, the 5Ks routinely used Robe-Ann Park for the start and finish of their runs.

"People are really into fitness right now," Weinschenk said in explaining increased interest in the 5K efforts. "Any time there's a good cause, a 5K seems to be a good way to

Turning to goals for 2015, Weinschenk expanded upon the three main projects he wants to see tackled his year.

Repainting the bottom of the pool is expected to occur at the end of the swim season, resulting in a $10,000 savings over doing it this spring. It would reportedly mark the first time the pool has been totally repainted since 1999.

Meanwhile, renovating the community building at Jaycee Park is seen as another means toward increasing park revenues with its potential for increased rental opportunity.

"It's a must," Weinschenk said of the proposed renovation project.

Repair work on the city tennis courts at Robe-Ann Park is another necessity, the park director said.

Increased activity at the Greencastle Aquatic Center is another park goal for 2015. The attraction of the new splash park, which opened the first week of August, is likely to help with that in the coming season.

Additional exposure could come from activities like a one-day deeply discounted sale of season pool passes (possibly on April Fool's Day) and the potential marketing of pool passes as gift certificates and as prizes for park events.

Other park goals for this year include increased training for park employees, additional voluntarism and overall greater exposure for park programs and amenities.

-- Heard Weinschenk report that the new nine holes to be added to the disc golf course at Big Walnut Sports Park have been assembled and will be installed in time to host a March tournament with assistance from disc golf groups from Cloverdale and Terre Haute. Proceeds from the event will go to fund the addition of trees and shrubs to the course.

-- Heard a report that the initial Walk and Talk event of the season drew 17 people on Wednesday, Jan. 7. Walk and Talk, a free program of exercise and camaraderie, is scheduled for 8-10 a.m. each Wednesday and Friday of January and February at the DePauw University Tennis and Track Facility.

-- Learned that a Brickmania Birthday Bash, celebrating the birthday of the Lego, is scheduled for 1-4 p.m. Sunday, Jan. 25 at City Hall. Fee will be donations to help replenish the department's Lego inventory.

The next regular meeting of the Greencastle Park Board is set for 7:30 p.m. Thursday, Feb. 5 at City Hall.