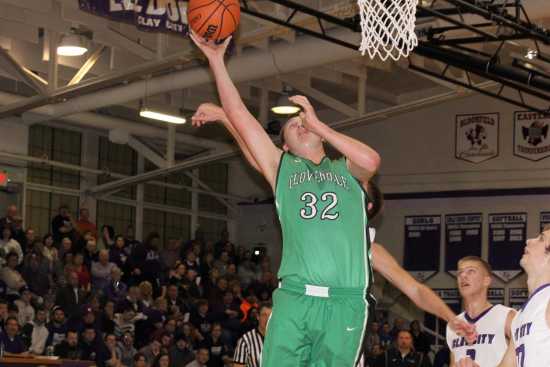 Cloverdale's Brantson Scott goes strong to the basket for two of his 11 points against Clay City on Saturday night. (Banner Graphic/CAREY FOX)

CLAY CITY -- Playing its third game in five days, Cloverdale looked as if it had some tired legs in its match-up against Class A No. 9 ranked Clay City on Saturday night.

The Eels countered Cloverdale's size advantage in the paint by knocking down three 3-pointers in the opening period to edge into a 12-9 advantage. Cloverdale's KJ Coleman was whistled for his second foul just 1:48 into the game and went to the bench. Fellow starting big man Brantson Scott picked up his second foul early in the second period as Clay City kept Cloverdale off the offensive glass.

Cloverdale got off to a 4-of-15 start from the field in the opening period, but stayed within 30-19 at halftime despite its struggles shooting the basketball. Clay City was able to push the basketball in transition to break the Cloverdale pressure for several lay-ins to take the halftime lead. The Clovers got 13 points from Marquise Moore before intermission.

"Well we need to get in better condition first. We have to be smarter with the basketball. We allowed (Clay City) to dictate the tempo so we have to work on that aspect of it," Cloverdale coach Pat Rady commented. "It was just a poor shooting night for us. We had good shots, shots that have been falling the last two games. We just didn't play well tonight. We've had some other games like this."

After missing most of the second quarter, Scott came in to score a pair of buckets to start the third quarter, the second off a nice feed from Jalen Moore. The Clovers got within 32-26 after a steal and a lay-in by Cooper Neese. However, the Eels seemed to have an answer for each Cloverdale run.

Brigham Booe scored back-to-back buckets for the Eels prior to a step back jumper from Marquise Moore. Noah Denker countered with a jumper for the Eels. Scott and Coleman finished off the quarter with scores to get Cloverdale within striking distance at 41-32.

The Eels had another run in them as Clay City ran off the seven straight points to open the fourth quarter and push the gap to 48-32. Cloverdale's explosive offense had another round in it as well.

Marquise Moore scored at the rim, Neese followed with a 3-pointer and a Clay City turnover led to a score by Moore as Cloverdale got within 48-40 with less than five minutes remaining.

It was the closest Cloverdale would get the remainder of the way however as Clay City got a driving lay-in from senior Logan Cesinger and a 3-pointer from Rogers. Two free throws by Trevor Singer and two more from Rogers extended the lead to 57-41 with under two minutes left as Clay City finished the game at the free throw line, hitting 10-of-11 in the final quarter.

"I think the main thing is that we need to get back and get better conditioned," Rady said. "We weren't moving on defense and we weren't moving on offense the way we have the last two games. We didn't show any energy right from the start I don't think. Clay City is a good basketball team. I think we'll be alright. This is a good time to get us to work harder. We've got a month to get ready for the sectional."

Moore had a game-high 26 points to lead the Clovers with Scott adding 11.