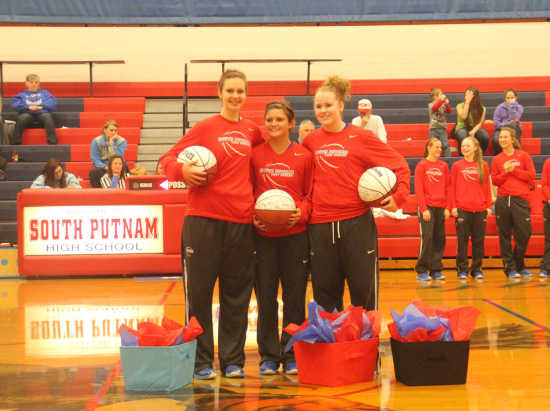 Once the South Putnam girls' basketball team took the lead against Linton-Stockton it never gave it back despite some tough defense and hustle from the Lady Miners. The Eagles took the victory 54-39 on Senior Night for the sixth win in seven games.

The game began with six straight points by South Putnam before a three-pointer from Lady Miner Jacklyn Nash began a seven-point run by Linton-Stockton.

In the second quarter South Putnam looked to put some distance between itself and the Lady Miners by forcing some turnovers and capitalizing on the offensive end.

"We just got to the point where we wanted to settle down and refocus ourselves," SPHS coach Tim Garver said. "We kind of got into it on the defensive end and made some turnovers. That got us some quick baskets .We were able to get some steals and layups."

The second quarter's defensive stops allowed South Putnam to go on a 15-6 run and go into halftime with 22-14 lead. Katelyn Lady made two threes and two foul shots in the quarter.

"It was a blast," Lady said. "It was great we were all picking each other up. It was a rough game they were trash talking a bit. But we didn't let it get to us."

The defensive game stayed present from South Putnam which had to contend with Thuis' six-foot frame. She scored seven of the 10 points in the third.

"They had a big girl and they were getting it in," Garver said. "We were trying to get our girls to come around and get in front. We weren't fronting the post like we should. So the good thing is that there are still some things we have to do to correct this for the next game."

Even with Linton-Stockton's presence down low, the Lady Eagles still managed 13 points in the third quarter to maintain an decent lead.

"Our success was just about staying in it and keeping our heads on," Dobson said. "At times we got frustrated and got discouraged. But we dug through it and stuck it out. So I'm really proud of everybody."

South Putnam's Lillie Stein nailed two threes while junior Katie Hewitt had her best quarter in the third with six points but her defense led the team all game. She had a team-high four steals and six rebounds. She also tied with Dobson for 15 points.

"We wanted to play hard for our seniors, especially for senior night," Hewiit said. "We are growing as a team and we get better every single day. That is a big part of it."

The Eagles saved their best for last. They continued to attach the paint using the size of Hewitt and Dobson to match Thuis.

Dobson capitalized on at the foul-line, making five-of-six in the quarter. The 19 Eagle points really put the game out of reach and the game was sealed with a thee-point play from senior Ariel Higgins after a steal.

"I had a really good time with my team," Higgins said. "I'm really glad that they were there to support us. They wanted it more for us than we did. I think that led to our win because they wanted to do it for us and make sure that we had a good senior night."

South Putnam's (9-8) next game will be against Monrovia on Saturday.